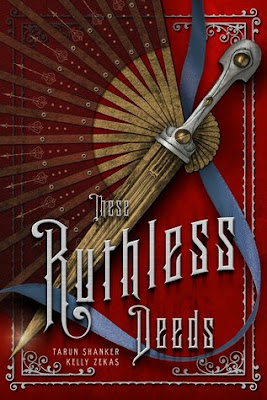 England, 1883. Still recovering from a devastating loss, Evelyn is determined to use her powers to save other gifted people from those who would harm them. But when her rescue of a young telekinetic girl goes terribly wrong, Evelyn finds herself indebted to a secret society devoted to recruiting and protecting people like Evelyn and her friends.


As she follows the Society’s orders, healing the sick and embarking on perilous recruitment missions, Evelyn sees her problems disappear. Her reputation is repaired, her friends are provided for, and her parents are newly wealthy. She reunites with the dashing Mr. Kent and recovers the reclusive Mr. Braddock (who has much less to brood over now that the Society can help him to control his dangerous power). But Evelyn can’t help fearing the Society is more sinister than it appears.

These Ruthless Deeds is the second installment in the These Vicious Masks series by the dynamic duo Tarun Shanker & Kelly Zekas. The story picks up shortly after the end of These Vicious Masks. Protagonist Evelyn Wyndham has thrown herself into trying to help others after a heart breaking loss. Others who have the power of telekinesis, and a variety of other powers that would make the X-Men sit up and take notice.

As Evelyn (the girl who can heal others), Miss Alice Gray (a woman who dream of powerful people), and Oliver Myles (a boy who can slip through objects), are trying to rescue another hapless soul by the name of Emily Kane (a telekinesis girl who Miss Gray met in an asylum), they quickly find themselves in danger. Saved by Mr. Kent (the man who has the ability to force a person to tell the truth) and his new friends. That would be Captain Goode & his brother who claim to work for the Society of Aberrations. The same society who funded Dr. Beck's research.

As Evelyn learns more about her own abilities, she finds herself wrapped up in the spiderweb of intrigue that is the Society of Aberrations. This Society is apparently looking to recruit other gifted people, but for what reason? Who are they really? What do they really want from Evelyn and the others? And, who is the mysterious person who sits at the head of the Society, and what does this person ultimately want?

Evelyn doesn't trust this organization, but after finding herself between a rock and a hard place, she really has no other choice but to heal who they ask her to heal. After promising to help reduce Sebastian Braddock's powers, how can Evelyn turn their back on them fully, and entirely? These Ruthless Deeds once again tosses in an unnecessary romantic triangle which I have decided is a brutal form of torture that should be outlawed by the Geneva Convention. Seriously. How can you have someone like Mr. Kent who is obviously in love with Evelyn, and then twist it so that Sebastian needs the comforting, which sends Evelyn off in another direction? Blah.

There is a huge twist in this book, and no, if you really want to know more, I am sure there are others who will spoil it for you. There is also a diabolically heart pulsing ending to this book which once again leaves readers wanting to find out what happens next. One could say that this was one of the cruelest endings to a book that I've read in a very long time. I am not sure that the authors will find a way to fix what they left behind in the bloody ruins of my emotions, and will find a way to somehow turn the events that has seen untold darkness to set into Evelyn's heart. But, one can hope, can't they?