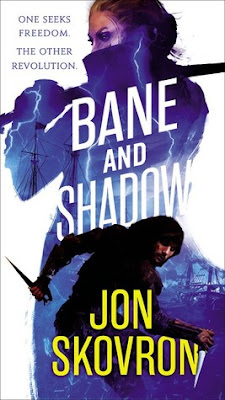 A killer adventure fantasy follow-up to HOPE AND RED, set in a fracturing empire spread across savage seas, where two young people from different cultures find common purpose. Red is being trained as a cold-blooded assassin by the biomancers. As he becomes increasingly embroiled in palace politics, he learns that even life among the nobility can be deadly. While terrorizing imperial ships as the pirate Dire Bane, Hope stumbles onto a biomancer plot of such horrifying scope that it makes even the massacre of her childhood village seem small in comparison. With the biomancers tightening their grip of fear over the empire, Hope and Red struggle to fill their new roles and responsibilities, but the cost will be greater than any of them realize.

Bane and Shadow is the second installment in author Jon Skovron's Empire of Storms trilogy. The story picks up approximately one year after the ending of Hope and Red. The story alternatives narratives between Hope and Red. A year after trading in his freedom for Hope and Brigga Lin's freedom from the Council of Biomancers (who they came to destroy), Red has been elevated to the position of the new Lord Pastina's which means he has become close to Prince Lester, the presumed heir.

Red finds out that living in subterfuge has it's drawbacks. Especially when he meets Lady Merivale Hempist, an anti-biomancer, bulls her way into Red's life, and changes what might have been a bleak future if he had been left alone to the Biomancer's machinations. He is something sinister under the control of the Biomancers. The Biomancers have manipulated Red into becoming their personal assassin against those who are enemies of the Empire. They are manipulators of biology, can twist people into twisted beings, and have created monsters that protect the borders. They also have secretive plans to "protect" the Empire from invaders from Alekbontar.

Meanwhile, Hope now Dire Bane, has become a thorn in the side of the Empire and the Council of Biomancers. Hope's crew of Nettie, Filler, Brigga Lin, Sadie, Alash, and One-Eyed Finn are now flying under the Flag of Dire Bane, and their ship is called The Kraken Hunter. The most curious addition to Hope's crew is Jilly who really does make this story entertaining. Right right out of the starting block, they are in the middle of taking down an Empire ship, and things get even more exciting as the story rolls on.

Hope remains as the only female Venchen and her sword is undeniably causing some uncertain feelings to crop up. Hope hopes to purge the Empire of the Council of Biomancers and free Red from under their control. At the root of the story is who is Hope really? She started out this journey with vengeance on her mind. Vengeance against the Biomancers who killed her parents and her village leaving her as sole survivor. She trained for years to become a Venchen Warrior, but she earned no respect at all from the male Venchen.

Hope has been so used to being alone, that she now has a core group of people she can call family & friends. But, one of its most important members is out of reach, for now. As Hope and her crew set out to destroy the Biomancer's plans on a remote island, she has no idea how her own path will play itself out when all is said and done. Is she the Pirate Dire Bane, hero to the people? Is she a Venchen warrior with ties to an empire she knows nothing about? If she isn't a pirate or a hero, or a warrior, who then is she really? I think we are in for a very interesting conclusion to this trilogy.