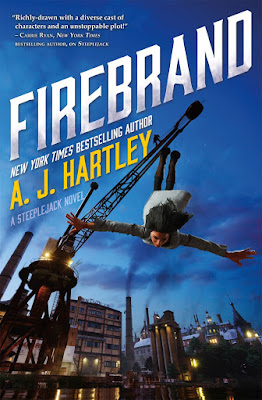 Once a steeplejack, Anglet Sutonga is used to scaling the heights of Bar-Selehm. Nowadays she assists politician Josiah Willinghouse behind the scenes of Parliament. The latest threat to the city-state: Government plans for a secret weapon are stolen and feared to be sold to the rival nation of Grappoli.

The investigation leads right to the doorsteps of Elitus, one of the most exclusive social clubs in the city. In order to catch the thief, Ang must pretend to be a foreign princess and infiltrate Elitus. But Ang is far from royal material, so Willinghouse enlists help from the exacting Madam Nahreem.


Yet Ang has other things on her mind. Refugees are trickling into the city, fleeing Grappoli-fueled conflicts in the north. A demagogue in Parliament is proposing extreme measures to get rid of them, and she soon discovers that one theft could spark a conflagration of conspiracy that threatens the most vulnerable of Bar-Selehm. Unless she can stop it.

Firebrand is the second installment in author A.J. Hartley's Alternative Detective series. This is a world that I have best described as being an alternative reality of 19th century South Africa. In this world, Bar-Selehm is home to 17-year old Protagonist Anglet Sutonga. Ang is a former Steeplejack, a Lani who has seen the worst sort of discrimination because of her skin color, and now works as a undercover detective for Josiah Willinghouse, a junior member of Parliament. The story really does start out in a action packed manner, and ends in a stunning manner.

After chasing a thief known as Darius through the city after he apparently stole plans for a secret weapon, it is decided that Lani will go undercover as a foreign Princess visiting Bar-Selehm. In order to assist Ang pass for said Princess, Josiah and his sister Dahria call in their grandmother Madame Nahreem to act as Ang's tutor. To become Princess Ki Misrae from Istilia fully, Ang must navigate treacherous waters in an attempt to discover who is helping their enemies from Grappoli. Ang must try to keep her head above politically and racially charged waters that seem to be heading for a complete eradication of anyone who is not white.

That includes refugees who have made their way to the country after fleeing the Grappoli armies, half-breeds, intellectuals, and other so called deviants. Ang stands as a passionate character who tries not to get caught up in too many roadblocks. Her relationship with Josiah & Dahria has moved forward to the point where Ang is comfortable feeling part of something good for a change. Especially Dahria who has bull dogged her way into Ang's life and takes as good as she gives. Ang hasn't forgotten where she came from, which is good since without connecting to her home which she was sent away from in the last installment, she would miss her former apprentice becoming a larger part of her sister's life.

This story is more of a social commentary than an action filled one. A bit of a let down from Steeplejack. Ang faces multiple mysteries, multiple characters who could be capable of anything, and ends up facing a whole lot of truths about her own character, and who she wants to become. One of my favorite characters, outside of Dahria, is Sureyna who was introduced in the previous novel. If you are looking for a character who has had tremendous character growth and possibilities for a bright future, it is Sureyna. In a way, there is a certain twisted cleverness to the author's attempt at giving Ang a bit of romance. Either way is perfectly acceptable to this reader.