Monday #Review - The Empress by S.J. Kincaid #YA #Science Fiction 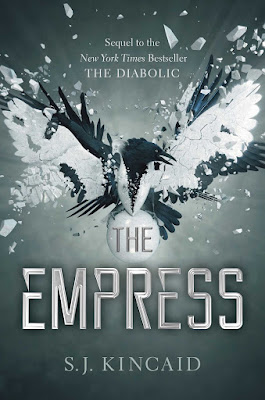 It’s a new day in the Empire. Tyrus has ascended to the throne with Nemesis by his side and now they can find a new way forward—one where they don’t have to hide or scheme or kill. One where creatures like Nemesis will be given worth and recognition, where science and information can be shared with everyone and not just the elite.


But having power isn’t the same thing as keeping it, and change isn’t always welcome. The ruling class, the Grandiloquy, has held control over planets and systems for centuries—and they are plotting to stop this teenage Emperor and Nemesis, who is considered nothing more than a creature and certainly not worthy of being Empress.

Nemesis will protect Tyrus at any cost. He is the love of her life, and they are partners in this new beginning. But she cannot protect him by being the killing machine she once was. She will have to prove the humanity that she’s found inside herself to the whole Empire—or she and Tyrus may lose more than just the throne. But if proving her humanity means that she and Tyrus must do inhuman things, is the fight worth the cost of winning it?

The Empress, by author S.J. Kincaid, is the second installment in The Diabolic trilogy. In the first book in the series, the author introduced us to Nemesis Impyrean, a genetically engineered Diabolic who was bodyguard to Sidonia Impyrean, the daughter of an important political figure in the Empire. Knowing that Sidonia was most likely going to be killed, Nemesis traveled with her to protect her. She eventually met & connected with 19-year old Tyrus von Domitrian who has since risen to become Emperor.

As their plan of marrying moves forward, Nemesis is set to become the first genetically engineered person to rise to the position of Empress. Unfortunately for Nemesis, a great may of the Gradiloquy, as well as the Helionics, hate her with a passion. Their attempts at keeping her from becoming the Empress has led to assassination attempts, and a treacherous Senator named Pasus who will do anything to put a boot to the neck of not only Tyrus, but Nemesis as well. Tyrus has his own issues as well. He is no longer the crazy person people have watched for years. He is now in the seat of the most important person in the galaxy.

Tyrus must bring the various factions together so that he can keep his people safe from outside forces. One of the curious trips in this book was Tyrus and Nemesis' trip a galaxy known as Transaturnine where a Sacred City exists. It is home to the Interdict, leader of the Vicars who have the power that Tyrus needs to make his scepter work. Tyrus not only wants the Interdict's blessing for his rise to being Emperor, but he also wants the Interdict to impart human-hood on Nemesis so tat they can marry with his blessing. It is during this trip, that a bit of history of the human race is revealed.

Nemesis only true ally might end up being Neveni, but will revenge against the Empire be too much to keep their friendship on even keel? Nemesis, as a character, really goes through the garbage disposal before being spit out to leave her bloodied and having to refocus her own path to happiness. She really can't rely on anyone else. I dare say that this book takes a whole lot of twists, and shocking turns of events. I'm still hyperventilating at the last 3 chapters of this book, and how Kincaid ends the story.

This is a story that was supposed to be happy time for the apparent happy couple, only to turn into hell on earth for both of them, which makes you curious what will happen in the third installment. I offer up that I, like many others, would have been happy had the first installment been a standalone. Now, with all that has happened, and all that is to come, one can't ignore the itch to discover what happens next to Nemesis and Tyrus.