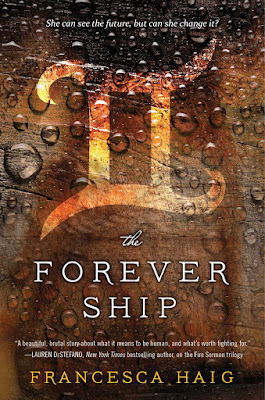 Haig's prose is gorgeous and engaging, particularly when she describes the desolate landscape, now peppered with ruins from the Before. Fans of dystopias will appreciate this adventure-filled yet character-focused tale that offers hope and explores (in a refreshingly nuanced way) the moral complexities involved in defeating an oppressive and backward government structure" (Booklist, starred review).

The Forever Ship is the third and final installment in author Francesca Haig's The Fire Sermon trilogy. This book picks up right where The Map of Bones left off. Haig has created a world that is 400 years in the future. The Earth has turned primitive following a nuclear fire that laid waste to civilization and nature. Though the radiation fallout has ended, for some unknowable reason every person is born with a twin. Of each pair one is an Alpha - physically perfect in every way - and the other an Omega burdened with deformity, small or large.

Surprising, the twins are always a boy and a girl. Whenever one dies, the other will as well. The series protagonist, Cass, is an Omega burdened with psychic foresight. Her sight allows her to see a future with yet another bomb blast thanks to her own brother Zach, and the Councilwoman known as the General. Cass has joined a struggling rebellion with those like Piper (Omega) and his sister Zoe (Alpha). When we last left Cass and this group, a ship called the Rosalind had just arrived along with a woman named Paloma.

Paloma comes from a place called the Scattered Islands or for those like Cass and the Omega's, Elsewhere. Elsewhere is like Nevernever. It has never been seen, & there have been people struggling to find it for years. It has also become something more of a bedtime story than reality. But, with Paloma's arrival, everything changes. The rumor now becomes hope. The hope of finally curing the plague called the twinning once and for ever. But, will Cass and her allies be able to stop her brother and the General from destroying it?

Cass is distracted for most of this story with visions of yet another blast thanks to the fact that the General has found a way to recreate the weapons that will send a nuclear bomb towards Elsewhere. She has no idea how to stop it since the General holds all the cards. Cass's journey hasn't exactly been an easy one, and one could get frustrated at her lack of progress as a character without understanding her first 13 years of her life. From branded with a Omega sign on her head after finding out that she's a seer, to living 4 years in captivity under the Confessor's brutality until she finally escaped. To discovering the ARK and and even more deadly secret that she does her best to stop.

Her relationship with her brother isn't an easy one to read about, mostly because he's like a member of the German Third Reich who wants to keep the status quo while subjugating the Omega's to tanks where they will never be allowed freedom again. Zack, aka the Reformer, is really a piece of work and you can't help but having zero remorse for anything that he's done to Cass or anyone else. Thanks to the Council member known as the Ringmaster, Cass and her rebellion may have hope in stopping the General's plans to destroy Elsewhere if they can survive.

In the end, The Forever Ship is filled with twists and turns and challenges. It ends on a remarkably unremarkable final chapter where I would never have guessed that Haig would end her series in this manner. In one way, it makes perfect sense with everything that has happened over the course of three books. In another, one could say that it might have been better had Haig gone a different direction. A direction that I won't spoil. I really did like the addition of Paloma and it's because of her own insecurities and abnormalities that haven't slowed her down. Paloma's addition gives readers an entirely different look at what may have happened to the rest of the world after the bombs fell.