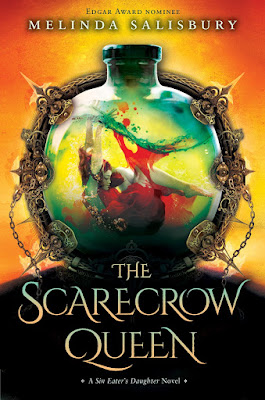 The stunning conclusion to Edgar Award nominee Melinda Salisbury's internationally bestselling The Sin Eater's Daughter trilogy.The rebellion is in peril. The dangerous Sleeping Prince, once thought to be nothing more than a fairy tale, has awoken from his enchanted sleep and is set on vengeance. As he tightens his hold on the kingdoms of Lormere and Tregellan, the net closes in on the ragged band of rebels desperately trying to defeat him. After surviving their harrowing journey, Twylla and Errin are separated, leaving them isolated, and running out of time. The final battle is coming, and Aurek will stop at nothing to keep the throne . . . forever. Explosive, rich, and darkly addictive, The Scarecrow Queen will lure you into a startlingly-original magical world you'll never want to leave.

The Scarecrow Queen is the third and final installment in author Melinda Salisbury's The Sin Eater's Daughter Trilogy. This story picks up right where The Sleeping Prince left off. This is a different sort of story. The author intermingles narratives between Twylla, and Errin. Twylla, who survived the brutal attack on the Conclave by the Sleeping Prince gets the first part of the story, while Errin, who finds herself at the mercy of the Sleeping Prince, gets the second part. The third part is mostly Twylla's.

Each has a fight on their hands. Twylla who is marked for death by Aurek because her blood can kill her, and Errin who is alone trying to find a way to bring down Aurek. If anyone can discover a way to defeat Aurek, Errin is the most likely candidate. Let's start out with Twylla, who is now the Sin Eater of Lormere after the events of the previous installment. Twylla is an entirely different character from the first installment. She refuses to accept the title of Sin Eater, and instead focuses on surviving. She is a survivor who has managed to stay alive despite horrible odds from book one forward.

I had a few minor issues with Twylla in the first installment, but found myself impressed that she's able to pull up her boot straps, and gather a group of like minded individuals to fight against Aurek. Her group includes Hope, Nia, & Kirin. With help from Hope, Twylla becomes the groups leader and pulls even more people to her cause. I especially liked the Red Rising particulars that Salisbury creates. One could actually think about the movie Red Dawn, where a group of kids fought back against foreign invaders who took their homes and families. Twylla really stands up and becomes the leader that I have been hoping for since we learned that she was being groomed to become Queen.

Meanwhile, Errin has struck up a nice relationship with Merek, the real King of Lormere. Nobody knows who Merek is except Errin who is only alive because of Silas. The same Silas whose blood is used to keep Aurek in his Elixir. Errin is brilliant and intelligent and has found herself in a situation where she has no control over her destiny or even her life thanks to Aurek. Her family has been twisted by Aurek. Her brother Lief, is a traitor, her mother is too far gone, and she has no idea whether or not anyone survived the destruction of the Conclave. Even though Twylla is the leader of this group, Errin is the one who holds the key to defeating Aurek.

Finale's can be the bane of my existence. But, Salisbury really did her best to wrap up things in a manner that really keeps the reader turning the pages and, above all, makes the story entertaining. My only disagreement with this story is the angst that existed between Twylla and her once fiance Merek. They are both strong willed individuals which means that more often than not, they will butt heads until one or the other realizes how ridiculous they are being. It is apparent that Salisbury was trying to send some sort of a message without the Happy ending that most readers enjoy.

I can honestly say the most heartbreaking parts of this story were Errin's. If you were a fan of Errin's in the previous installment, I think you will be a bit saddened that she doesn't get a bit of her own payback. This book is a bit on the dark side. It has to be considering everything that Aurek has done since ripping Lormere apart and brutalizing anyone who stood in his way. Can villains be forgiven for their trespasses? Too bad we can't ask Lief what his thoughts are on the subject.