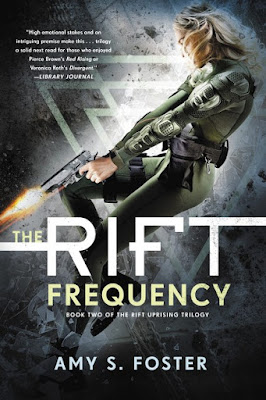 To save her love and unlock the mystery of who she is, a brave young woman must travel between alternate realities in this exciting second book in The Rift Uprising Trilogy

She didn’t mean to, but teenage super-solider Ryn Whittaker started an uprising.


For three years Ryn was stationed at The Battle Ground Rift site—one of the fourteen mysterious and unpredictable tears in the fabric of the universe that serve as doorways to alternate Earths—and then she met Ezra Massad.

Falling in love and becoming a rebel Citadel wasn’t part of Ryn’s life plan, but with Ezra there asking all the right questions, they began to decode what’s really going on, and what they discovered was enough to start a civil war.

When the base explodes with infighting and Ezra gets caught in the fray, he is accidentally pushed through the Rift, taking a stolen laptop—and the answers it could give Ryn—with him.

Now all Ryn wants is to locate Ezra and get back to her Earth. But that’s not easy when she’s traveling the multiverse with Levi, the painfully guarded Citadel who shoved Ezra through in the first place. And Ryn is quickly learning that inside the multiverse there is no normal—it’s adapt, or die—and the one weapon she really needs to win the war back home is the truth.

The Rift Frequency, by author Amy S. Foster, is the second installment in The Rift Uprising Trilogy. The Rift Frequency is an action packed, science fiction, travel through strange alternate multiverses adventure. Protagonist Ryn Whittaker is a Citadel, a super soldier who was altered by an alien race called the Roones. She's also team leader of beta team and the instigator of a rebellion against her superiors. Ryn and Levi Branach have jumped into the Rift in order to find Ezra Massad who uncovered things about what was done to them as children.

As Ryn and Levi journey their way through dozens of multiverses, they also come into contact with a variety of different settings as well as a variety of curious beings. From a universe where the US was conquered by Japan, to a universe that is toxic, to a universe that could be called water world, to a world where everyone looks like someone important back on Ryn's world. Let's stop a moment and chat about this universe. This is important because these are sentient machines who have reached what's called a singularity where AI's have overtaken human intelligence and a doomsday scenario followed.

Ryn and Levi are the first humans in 2,000 years. These beings are a bit overprotective about not wanting them to leave. Ever. It is also the point in the series where Ryn knows she needs all the allies and technology she can get her hands on for her fight against the Roones and their human supporters. Not only do Ryn and Levi find themselves with new technology, but perhaps a hope for a future where Ryn and the rest of the Citadel's can actually have a normal life free of protecting the Rift from aliens that arrive on Earth.

Ryn & Levi's journey brings them to an world where the Romans are still around. This is pretty interesting actually. Ryn and Levi are caught, become temporary slaves who are forced to become gladiators in order to fight for their lives and freedom. Why I mention this at all, is that this is the point where someone starts to follow the duo wherever they go. This is the point where Ryn understands that there is much, much more to her than she ever knew which is later confirmed by another alien race. She can actually feel when Rift's are created. She can feel when something in their setting is not right.

I loved the idea of multiverse travel. I'm curious about the relationship that grows between Ryn and Levi, while Ryn's relationship with Levi cools off significantly. I will say this. I liked Levi because we know who he is and what he is capable of because Ryn is as well. He will follow Ryn because he respects her and what's she's done. Then there's Ezra who I really didn't care for this time out. Seems as though he's lost everything that made him interesting in the first installment. Instead, Ezra becomes a whiny, snot nosed douche who thinks he's better than anyone else. Meanwhile, Ryn's journey ends on a curious cliffhanger ending. The fact that these are supersoldiers with Star Trek technology, including drones, gets to the core of my geek side. Bring me the sequel now!