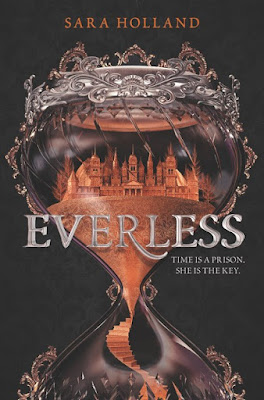 
Time is a prison. One girl holds the key. This is a thrilling, high-stakes new fantasy duology, perfect for fans of Red Queen, Three Dark Crowns, and Six of Crows.

In the kingdom of Sempera, time is extracted from the blood, converted into coins, and used as currency or consumed to add to one’s lifespan. The rich aristocracy amass eons in their vaults, while the poor are forced to cut their futures short in order to survive in the present. And few families are richer than the Gerlings, who lord over the peasants from Everless, their palatial estate.

A fateful accident once spurred Jules and her father to flee Everless in the dark of night. But ten years later, in order to save her dying father, Jules must secretly return. Everless holds more temptations—and dangers—than Jules thought possible. Soon, she’s caught in a tangle of violent secrets, and finds her heart torn between two people she thought she’d never see again. Her decisions have the power to change her fate—and the fate of time itself.

This dazzling debut novel, starring a fierce heroine and rife with high-stakes adventure, engrossing mysteries, star-crossed romance, and captivating magic all set in a richly built world, will leave you counting down the seconds until the next installment.

Everless, by debut author Sara Holland, is the first installment in a yet to be named series. 17-year old Jules Ember is the lead character in this series. She lives in a society where blood is currency, and a person's time can be drained to pay off debts or punishments owed to the monarchy. 10 years ago, Jules and her father Pehr Ember lived on the estate owned by the Gerlings called Everless. That is until an accident sent them fleeing from the estate ending up in Crofton, living under the radar as much as possible.

People in Sempora wait in line for hours to have time drawn from their blood and forged into blood-iron coins. This is also a world where breeders lay in wait for people to come along so that they can extract the blood from an unwilling victim which then can be turned into Blood-iron coins. The downside of this world is that one can bleed themselves into losing great chunks of time they desperately need to survive. If you lose too much time, you can also lose your mind and drift away,

Jules ends up as a servant at Everless, serving in the kitchen and then as the handmaid of the Queen’s daughter; Ina Gold. This position lets their relationship develop into a real friendship that seems to be mutually beneficial to both. Jules also finds that she still possesses a bit of a grudge when it comes to Liam for what he apparently did to his brother Roan 10 years ago that got Jules and Pehr removed from Everless. Jules also has a curious ability which I shalt not spoil. I have seen the spoiler elsewhere, but it's a key part of what happens in the final 1/4 of this series to send all sorts of events into chaos.

There is also a curiosity that the author tries to convey by introducing the Sorceress and the Alchemist who bound time to blood and metal and stole the Sorceress's heart. I believe that at times, Jules is a bit too curious for her own good. Especially when she and Ina set off to discover long lost secrets that affect both women. There is also the Queen's handmaiden Caro that really sets the bar for being a serious villain. There is a point to where I was wondering how many more secrets can Holland spin before my head imploded.

The mystery of the Sorceress and Alchemist really blew my mind and thus I will be reading the sequel which is currently being called Evermore. One of the other curiosities is the twisted romance angle that the author forges and then blows apart at the seams leaving a rather large cliffhanger ending for readers to deal with. The high-stakes, richly layered and developed world, varied and intriguing cast of characters, and original concept of Everless, make it stand out in a fantasy marketplace full of strong heroines.