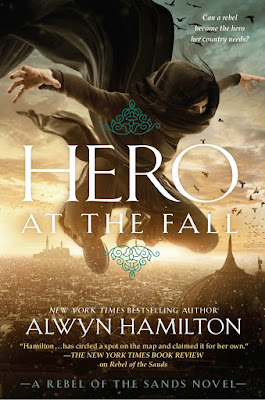 The breathless finale to the New York Times bestselling Rebel of the Sands series will have you on the edge of your seat until the dust from the final battle clears!When gunslinging Amani Al’Hiza escaped her dead-end town, she never imagined she’d join a revolution, let alone lead one. But after the bloodthirsty Sultan of Miraji imprisoned the Rebel Prince Ahmed in the mythical city of Eremot, she doesn’t have a choice. Armed with only her revolver, her wits, and her untameable Demdji powers, Amani must rally her skeleton crew of rebels for a rescue mission through the unforgiving desert to a place that, according to maps, doesn’t exist. As she watches those she loves most lay their lives on the line against ghouls and enemy soldiers, Amani questions whether she can be the leader they need or if she is leading them all to their deaths.

Hero at the Fall is the third and final installment in author Alwyn Hamilton's Rebel of the Sands Trilogy. This story begins right where Traitor of the Throne left off. After a twisted turn of events at the end of the previous story, Amani Al’Hiza aka the Blue-Eyed Bandit, is one of the few remaining rebels not in captivity. She has become the de facto leader of the rebellion, but she would rather have someone else in charge, like her friend Shazad or Ahmed, so she can do what she does best.

Word has spread that the Rebel Prince has fallen, and hope is quickly fleeting with the invading Gallan army approaching quickly. But, Amani knows the truth and so does the remaining rebellion. He's been captured and sent to place where it is virtually impossible to get into, let alone escape. To make things worse, she, along with Jin, Prince of Miraji, Hala, Izz, & Maz are unable to leave the city of Izman due to a protected dome. Amani and her group make some interesting choices in this first part of the story. Choices that lead to a curious alliance which I won't spoil.

Amani's journey from the beginning has been a twisted one. From a small dead-end village, to becoming the Blue-Eyed Bandit able to hit any target without missing, to learning that she is more than human. She is able to control the sands, and she has fallen in love with a boy who is supposed to be high above her station. She has also found friendship among a group of Rebels who were looking for a new way of living and having control over their own lives. Amani can be selfish, and self-less. She can be fearless and brave and able to find the strength to keep going when others would have given up.

Finale books for me have been hit or miss for a long time now. In this books case, I think the ending was perhaps a bit rushed. Then there was an interesting Epilogue of sorts which gives light to the lives of those we have come to love or hate since the beginning. I have to agree with others. I love the relationship between Amani and Shazad. There is a particular scene that shows home much respect and admiration the two have for each other. Then, of course, there is the romance between Amani and Jin. Not a fan for awhile, ended up being quietly content with it by the time we get to the end.