#Review - The Book of Peril by Melissa McShane (Urban Fantasy) 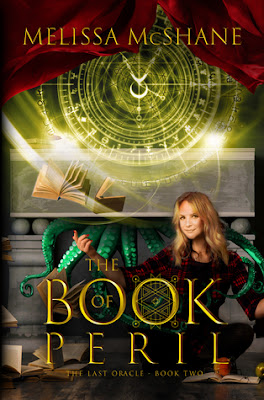 As the custodian of the oracular bookstore Abernathy’s, Helena has faced any number of challenges in learning her new role. But when the store begins giving out false prophecies, Helena comes up against her greatest challenge yet: how can she fix Abernathy’s when she doesn’t truly know how it works?Armed only with a few special talents and her desire to protect her magical charge, and with the assistance of her best friend Viv, her reluctant assistant Judy, and the enigmatic and handsome Malcolm Campbell, Helena must navigate the treacherous depths of the magical world, where secret enemies lurk behind illusions capable of fooling even the most powerful of magical entities. Helena is the only one who can see past those illusions, but will her abilities prove strong enough to save the oracle?

The Book of Peril is the second installment in author Melissa McShane's The Last Oracle series, and the follow-up to The Book of Secrets. The story takes place 5 months after protagonist Helena Davies became custodian of Abernathy's. Abernathy's is a magical place where prophecies (auguries) are given out for a price. Helena, along with her assistant Judy Rasmussen, have been trying to understand not only her role, but how the Oracle actually works. But, as the story opens, it appears as though the Oracle has gone wonky giving out the wrong auguries or auguries for those who never actually requested one.

As the story progresses, Helena must contend with origami-wielding bad guys, a stalker ex-boyfriend who thinks he deserves a second chance, an attractive ex-Navy SEAL who should be her love interest, as well as the tribunal after her co-worker is charged with being the cause of the Oracle's issues. As Helena fights to protect the oracle, clear her co-worker who she was actually enemies with in the first installment, she finds time to visit the spiritual successor to the Library of Alexandria, the Athenaeum, searching for clues in past custodian’s reports of strange behavior.

Helena is a curious character who I like. Helena has the unusual ability to see through illusions which is a fantastic thing to have when someone is trying to mess with your livelihood. Although she often puts her life on the line, and ends up in dangerous situations, she has a decent heart and means well. She could have just walked away from her co-worker and let her figure out how to get out of her troubles, but she knew in her heart that she wasn't responsible for what's happening with the Oracle.

Then there is the prickly Lucia Pontarelli aka the Custodian of the Neutrality known as the Gunther Node. In this world, she is the local law enforcement when it comes to keeping the various factions in line with the accord. She and Malcolm Campbell are what's standing between normals finding out about the ongoing battle that has ensnared both the Nicolliens, and the Ambrosites. Malcolm is also said love interest who Helena should be able to be with without all the stupid restrictions placed on both of them by the accords. I dare hope that the author finds a way to work around that instead of shoving either character with someone else. Even though they can't be together, I think Malcolm would charge into a burning house to save Helena with no regrets about being hurt or injured. I dare you not to call that love.