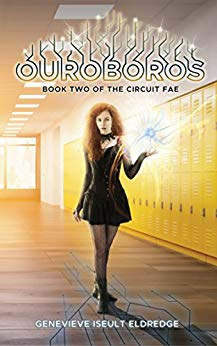 All introverted geek girl Syl Skye wants is to get close to her girlfriend. But when you can kill with a simple touch, a normal date night’s not really in the cards.

As it happens, Syl is also a sleeper-princess of the fair Fae. Last year after a freak accident, her power Awakened, granting her white flame to purify the darkness.

Rouen Rivoche is that darkness—a dark Fae princess whose power to bewitch mortals is as terrifying as the violet lightning she controls. Rouen is Syl’s total opposite. Her mortal enemy.

And even though they joined forces to defeat the evil Circuit Fae who harnessed the killing magic in technology to take over the school…that was so last year.

Now, Syl’s touch could mean Rouen’s death. Her increasing power is spiraling out of control, threatening to burn down everything she and Rouen have built together.

Their lives, their love, their very world.

Ouroboros is the second installment in author Genevieve Iseult Eldredge's Circuit Fae series. The series actually has two main characters: 17-year old Syl Skye, a sleeper Princess of the Summer Court whose powers came to life in the previous installment & Rouen (aka Euphoria) Rivoche, a former Winter Court Princess who was punished by her people to become a Huntress. The story picks up shortly after the first book ends, having Syl and Euphoria prepping for their junior year of high school.

Even though the girls, who are now a couple, defeated the main villain in the first installment, it still isn't over. Life hasn't exactly been easy for the girls. At night, the girls chase down the damage left behind from Agravaine and his Ouroboros. The other issue is that the girls are having a hard time touching one another for more than a couple of seconds without Syl's powers going haywire. With the girls struggling to make things work out in their favor for once, it would be a seriously bad time for evil to raise it's head.

Not when the Fiann, who is supposed to be in rehab, returns to school and starts right in with her machinations and evil intentions. She starts by attempting to lure Euphoria to her side and watch Syl crash and burn. Fiann steps up her game. A lot. She has no clue as to what she has opened up, but she is so focused in her desire to rule in her former boyfriends stead, that she even thinks she has an ally in a new character who is introduced.

A character who decides he's going to throw a wrench into the mix and screw up everything Syl and Euphoria have worked for. Yep. It's complete and utter insanity. Welcome to the second book in the series! If you think the first part of the story is insane in the membrane, you have got to read the final chapters. This story really is packed with intense action, and of course, a whole lot of romance. Even though there are major hurdles standing in the way of the girls, they do what they can to remain true to themselves and not allow themselves to be torn asunder by a jealous, and manipulative villain.

Recommendation: I would say that this series is aimed at the younger teen (16) which is not me. I think they would enjoy the choice of language and the high school angst and bully girls. I would say that if you would like to read this book, and you are a Kindle Unlimited subscriber, to go ahead and read it since it's currently free.