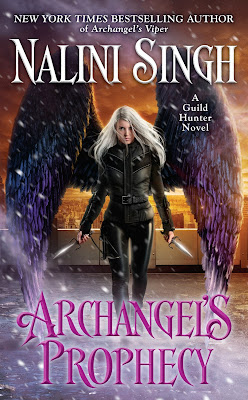 Midnight and dawn, Elena’s wings are unique among angelkind—and now they are failing. The first mortal to be turned into an immortal in angelic memory, she’s regressing. Becoming more and more human. Easier to hurt. Easier to kill.

Elena and Raphael must unearth the reason for the regression before Elena falls out of the sky. Yet even as they fight a furious battle for Elena’s very survival, violent forces are gathering across the world. In China, the Archangel Favashi is showing the first signs of madness. In New York, a mysterious sinkhole filled with lava swallows a man whole. In Africa, torrential monsoon rains flood rolling deserts. And in Elena’s mind, whispers a haunting voice that isn’t her own.

This time, survival may not be possible…not even for the consort of an archangel.

Archangel's Prophecy, by author Nalini Singh, is the 11th installment in the authors Guild Hunter series. Welcome back once again to an Alternative US where Archangel's, vampires, and Guild Hunters play a dangerous game where only the strongest survive. One of the strongest is Elena Deveraux. Elena is an Hunter-Angel born with the capacity to track vampires and angels by their scent. She is also consort to the most powerful immortal in North America; Archangel Raphael.

This book is really a multi-pronged story arc. First, it appears as though the second incarnation of the Cascade: a confluence of time and unknown critical events that ignited a power shift in Archangels, has returned and this time it may be Elena herself who is the one that the Cascade will affect the most. Elena finds herself shedding feathers and nothing seems to actually work to help her explain the problem, or why it is happening to her now.

What's even more bizarre, is that someone, presumably a sleeper Archangel, has noticed Elena and is whispering things in her mind. Things that are so shocking that you have to wonder if the author is going to go there. As an Angel-Made, Elena is breaking new ground that hasn't been seen in millennial. You really have to feel for what Elena is going through in this story, while also questioning some of the things she does.

She keeps getting weaker and weaker and one has to wonder if she is reverting back to her human form, or if the author has something sinister in plan for her whenever she next features Elena and Raphael.  The next part of the story hits close to home when her brother-in-law Harrison is attacked by an unknown assailant and her sister is threatened which sends Elena on a mission to find those responsible. The further she searches, along with Ashwini and Janvier, the deeper she gets into the city she lives in, and the vampires who are looking for the next big thing when it comes to stimulation. With Elena slowly unraveling, finding Harrison's attacker becomes a priority above everything else.

I will say this, Elena's struggles are real, but the Harrison issue was a bit too easily solved. Instead of fighting for her own survival, she kind of just acts like nothing is wrong, and that she will survive because of her love for Raphael. Not to put the horse before the cart, but I have a very bad feeling that things are going to get even more bizarre from here on out. My advice is to ignore all the reviews of your favorite bloggers, pick up the book, and see for yourself what sinister things the author has conjured up in order to make this story one of the more curious endings in this entire series. It's only fair to warn you that the book ends on a blistering cliffhanger.

Illium turned in a direction that would take them to the Catskills if they kept on going.
Sweeping closer to him, she said, “You just want to fly?”
Hair rippling in the quiet but cutting wind, he twisted down in a complicated fall before flying back up to her side. She laughed at his showing off. That was Illium. An angel of violent power who had a heart that might almost be mortal. And, these days, she could appreciate his tricks again. Not a single angel in the city had been ready to witness his acrobatics in the immediate aftermath of the day he’d crashed out of the sky.
Elena would never forget her screaming fear.
To his credit, Illium had flown with absolute discretion for months, letting the memory dull and fade.
When he returned to her side today, his face was flushed, the gold of his eyes rich. “Sky’s too beautiful to shut ourselves away in a club.”
“Just don’t forget I’m not as fast as you. Also, I’m currently lame.”
Illium lifted one cupped hand close to his shoulder, the other moving back and forth . . . and she realized he was playing a tiny violin in response to her morose tone.
“Crossbow, Bluebell.” Narrowed eyes. “Remember the crossbow.”
He dived, his wicked laughter floating up on the night air. Lips twitching, Elena continued to glide, letting the air currents sweep her along with cold but gentle hands. Illium, meanwhile, flew circles around her—but he never went far, always close enough to halt her descent should she tumble.
She landed a number of times to rest her wings, once in an isolated park whispering and dark. A luminescent insect appeared then disappeared from sight before she could truly see it, an earthbound star. The ghostly owl sitting on a tree branch watched her with eyes even more luminous.
A sigh deep in her mind, an old, old presence restless in Sleep.
The hairs rose on her arms.
Then Illium shot them both up into the sky again, and together, they flew far beyond the diamond-bright skyline of the city and over the sleeping homes of ordinary people who lived in a world of vampires and angels, blood and immortality.
Another rest stop for Elena.
Another throb of pain from the cut on her forearm.
Another watchful owl, this one landing on Illium’s shoulder without his knowledge. Ashwini had told her not to be afraid of the owls, so Elena ignored the goose bumps and said, Hello, with her mind. A good night to fly.
A vein began to throb at her temple.
The answer came a long time later, after they were in the air again, the glow of the sinkhole visible from the distance.
It has been an eon since I flew.