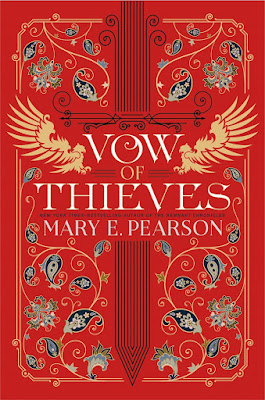 The thrilling sequel to Dance of Thieves, featuring danger, deception, and romance.

Kazi and Jase have survived, stronger and more in love than ever. Their new life now lies before them—the Ballengers will be outlaws no longer, Tor's Watch will be a kingdom, and the two of them will meet all challenges side by side, together at last.

But an ominous warning mars their journey back, and in their rush to return to Tor's Watch, just outside the fortress walls, they are violently attacked and torn apart—and each is thrust into their own new hell.

Unsure whether the other is alive or dead, Kazi and Jase must keep their wits among their greatest enemies and unlikeliest allies. And all the while, Death watches and waits.

Vow of Thieves, by author Mary E. Pearson, is the finale to the Dance of Thieves duology. This series takes place in the same universe as the authors Remnant Chronicles. The story start off few weeks after Dance of Thieves ended with Kazimyrah of Brightmist/Rahtan, and Jase Ballenger, Patrei of Tor's Watch, returning to Tor's Watch with wonderful news from Lia, the Queen of Venda. Jase once her prisoner, is now her lover. Kazi is worried about earning his family's acceptance after she kidnapped him to bring him to justice for harboring fugitives from her kingdom.

But, everything is about to head further into chaos and danger when they are ambushed. Separated, they must face their own individual battles for survival, not sure if the other has even survived, but hoping against hope to be reunited. Kazi, who was given the title of ambassador, is taken to Tor’s Watch where she sees the destruction wrought by their unseen enemy who is very familiar to readers. The cathedral is in ruins. Soldiers are everywhere and Jase’s family is in hiding.

Kazi intends to honor her vow to protect his family and her directive to the queen to find the missing papers that produced the horrible weapons now being used against them by a King with no morals who needs mercenaries to carry out his dirty work. Meanwhile, Jase finds allies in Caemus, Kerry of Fogswallow, as well as Kazi's friends Wren & Synove. He will eventually discover the truth about who is responsible for attacking his watch, as well as learning what his family has been doing since Tor was sacked by King Montegue of Eislandia who claims he was saving the city from raiders.

You do need to remember what happened in the first book in order to understand key characters and what has happened to get Kazi and Jase to this point in the series. Kazi and Jase spend most of the book separated. Each has their own adventures while hoping that they will find each other again. When they do, they are unstoppable as a team. The ending really wraps up things nicely as well as bringing back some characters from the authors Remnant Chronicles including Lia, Kaden, Rhys, Griz, Nash, and Paulie. It also closes a chapter in Kazi's life that has been left unfilled since her mother was stolen away from her when she was just a child.

I think it's fair to say that the author will come back to this world at some point. In fact, she really leaves the door opened for a return with a curious final page.