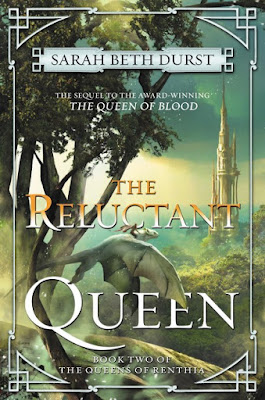 Everything has a spirit: the willow tree with leaves that kiss the pond, the stream that feeds the river, the wind that exhales fresh snow . . .
And those spirits want to kill you.

It’s the first lesson that every Renthian learns.
Not long ago, Daleina used her strength and skill to survive those spirits and assume the royal throne. Since then, the new queen has kept the peace and protected the humans of her land. But now for all her power, she is hiding a terrible secret: she is dying. And if she leaves the world before a new heir is ready, the spirits that inhabit her beloved realm will run wild, destroying her cities and slaughtering her people.

Naelin is one such person, and she couldn’t be further removed from the Queen—and she wouldn’t have it any other way. Her world is her two children, her husband, and the remote village tucked deep in the forest that is her home, and that’s all she needs. But when Ven, the Queens champion, passes through the village, Naelin’s ambitious husband proudly tells him of his wife’s ability to control spirits—magic that Naelin fervently denies. She knows that if the truth of her abilities is known, it will bring only death and separation from those she loves.

But Ven has a single task: to find the best possible candidate to protect the people of Aratay. He did it once when he discovered Daleina, and he’s certain he’s done it again. Yet for all his appeals to duty, Naelin is a mother, and she knows her duty is to her children first and foremost. Only as the Queen’s power begins to wane and the spirits become emboldened—even as ominous rumors trickle down from the north—does she realize that the best way to keep her son and daughter safe is to risk everything.

Sarah Beth Durst established a place of dark wonder in The Queen of Blood, and now the stakes are even higher as the threat to the Queen and her people grows both from within and beyond the borders of Aratay in this riveting second novel of the Queens of Renthia series.

The Reluctant Queen is the second installment in author Sarah Beth Durst's Queens of Renthia trilogy. This story picks up 6 months from where The Queen of Blood left off. Daleina is Queen of the Forests of Aratay, and the sole survivor of the coronation day massacre. But, she is losing control of the spirits that she is supposed to keep from harming her people and her villages. Killing the Queen would set the spirits free, and boy would they love to see that happen! What's worse, is that Daleina is experiencing blackouts that have become more frequent.

So frequent, in fact, that she gives her Queen's Champions 3 months to find a heir or else all is lost. Here is where Naelin comes in. Naelin has a family. She has a husband, a boy, and a girl, and lives in East Everdale. But, after a spirit attacks her home, Naelin's life suddenly turns on a dime. Her husband brags to anyone who listens that Naelin is powerful. Soon thereafter, Vin, Queen's Champion and Captain Alet, the Queen's Guard, travel to her village to test her. Naelin is extremely strong, so strong in fact, that the point becomes moot when Ven gives her almost no choice in what's to happen next.

To make matters worse, things are dire in Aratay. Possible heirs are dying rapidly, a former friend of Daleina seems to be willing to go to war in order to remove Daleina from being a Queen, and Daleina herself is slowly dying of an unknown ailment that has the Royal Healer, Hamon, so desperate that he calls on his diabolical Mother to find a way to save Daleina before people being slaughtered by spirits. To that point, the author brings in Daleina's own sister, Arin, who gets some much needed education on who to trust, and who not to. Arin's relationship with Mistress Garnah is bizarre and twisted to the point where it Arin almost has stars in her eyes from being around her.

Daleina is an interesting character. She is a reluctant Queen in that she had no choice in asking the spirits to choose her to become the next Queen. Daleina was never the most powerful candidate and now, even with the extra Queen powers, she is struggling.  She's not as powerful as the previous queen, or her former friend Merecot for that matter, or even Naelin who seems to be gifted with unlimited powers over the spirits but reluctant to put the country first before her children. The spirits know when something is amiss with their chosen Queen's. They laugh at them, take advantage when they are in a weak state, and feast like it's Thanksgiving meal whenever Daleina loses control.

I spent so much time pushing this series aside, that I feel really stupid now. Sarah Beth is a phenomenal author who has created an fantastically unique world where people live in tree villages, while spirits of all forms itch to take a bite out of the populous. Very few people descend to the forest floor, and, if they choose to do so, it's something they do at their own peril. The trees themselves, the air, the water, and the earth are all controlled by spirits with a deep and abiding hatred of humanity. The spirits choose the queen from a group of women who have spent most of their lives honing their inner ability to communicate with and control the countless spirits that exist in the world.

The title of this book couldn't be more poetic due to all that Naelin goes through before she agrees to be trained by Vin. She also gets some interesting protection with Bayn Wolf who we still don't know a whole lot of. We do know that he will protect Naelin and her children with his last breath if necessary. This is a series that definitely needs to be read in order so that you know who Merecot is and what seems to drive her towards her lunacy in removing Daleina from being a Queen.