#Review - The Sign of the Serpent by Majanka Verstraete #YA #Fantasy 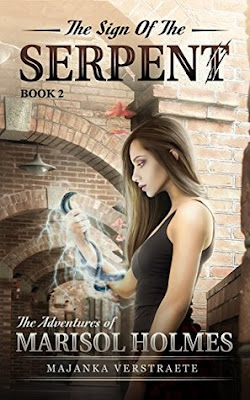 Meet Marisol Holmes: High School Student, jaguar shifter, and great granddaughter of Sherlock Holmes. She’s solved countless supernatural cases, but her next one’s the hardest yet. Why?
Marisol is about to lose her heart.

Two days ago, terrible events shattered the very foundation of the Conclave. Now, Marisol Holmes swears she’ll stop at nothing to destroy the man she once loved: her arch nemesis, Mannix.

But when a cryptic clue left by Mannix leads Marisol to a secret room that once belonged to her father, she realizes that hunting down Mannix won’t be that easy. If she wants to catch him, she’ll have to retrace the steps of her own past and discovers secrets that might have been best left buried.

When the hunt for Mannix brings Marisol to London, she teams up again with Roan and Wyatt on a quest for the truth that leads her through the dark alleys of London, to shady shifter pubs, to libraries cloaked in magic, and eventually to an abandoned castle in Scotland that once belonged to her family.

But Mannix is as sadistic as he’s smart. At every turn, Marisol and her friends face harsh truths and deadly puzzles and risk their lives to uncover a past that should stay buried. With the stakes getting higher and Marisol’s attraction to Roan growing, can Marisol deny what she truly wants, even if it puts her new love on a collision course with her villainous ex?

The Sign of the Serpent, by author Majanka Verstraete, is the second installment in the authors’ The Adventures of Marisol Holmes. This book continues where A Study in Shifters left off. Protagonist Marisol Holmes is a half jaguar shifter who nearly lost her ability to shift. She's also the great granddaughter of Sherlock Holmes. She’s solved countless supernatural cases, but there is one that is still chasing answers deep into the night. The murder of her own father which has left zero clues as to who might be involved.

Mannix is the boy she fell in love with only to watch him kill her cousin and demand that she makes a choice that put her own mother in the danger zone. Marisol has been outmatched by Mannix a puppet pulling Marisol's strings. With the events of the previous story, Marisol is now the only Sigil Bearers of the Conclave. The Conclave is a secret organization of supernatural creatures who solve paranormal crimes and protected the human world from ever finding out the creatures of their nightmares were all too real.

Marisol, who is also heir to the Shifter throne, finds herself with Balthazar's ring & the highest ranked member of the Conclave. But, forget about all of that for now. There's a bunch of politics involved which just slows Marisol's desire to punish both Mannix and Indra who betrayed her and left (13) dead in her wake. While Mannix is devising a twisted game for Marisol to solve, Marisol is joined by her friends Roan Black and Wyatt to travel to London where the game is joined almost immediately. While Marisol's attraction for Roan has grown, she can't loose focus on beating Mannix at his own game.

While dealing with Mannix's game and Indra's taunts, he also gives her hopes that she can finally solve the one mystery that has eluded her: The murder of her father. When she finds the answers to all of her questions, will they all lead to the same person? Or, were others involved as well. I liked the hunting part as it takes readers all around London to a variety of Sherlock Holmes related places, e.g., Baker Street, Madame Tussaud's and a pub that Sherlock and Watson frequented. I didn't, of course, like the ending since he ended on a cliffhanger. At this point, you pretty much need to read the final book to figure out where the author intends to send Marisol.