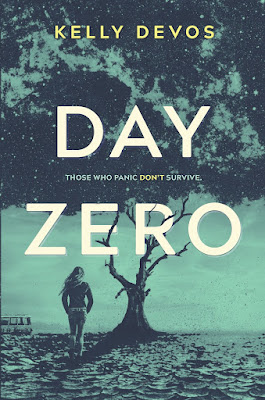 An exhilarating new novel from the author of Fat Girl on a Plane! Featuring a fierce, bold, tech-savvy heroine who will fight for her family and do whatever it takes to survive, fans of Susan Beth Pfeffer’s Life As We Knew It series, Rick Yancey’s The 5th Wave series, and Neal and Jarrod Shustermans' Dry will cheer for this fast-paced, near-future apocalyptic adventure.

If you’re going through hell…keep going.


Seventeen-year-old coder Jinx Marshall grew up spending weekends drilling with her paranoid dad for a doomsday she’s sure will never come. She’s an expert on self-heating meal rations, Krav Maga and extracting water from a barrel cactus. Now that her parents are divorced, she’s ready to relax. Her big plans include making it to level 99 in her favorite MMORPG and spending the weekend with her new hunky stepbrother, Toby.


But all that disaster training comes in handy when an explosion traps her in a burning building. Stuck leading her headstrong stepsister, MacKenna, and her precocious little brother, Charles, to safety, Jinx gets them out alive only to discover the explosion is part of a pattern of violence erupting all over the country. Even worse, Jinx’s dad stands accused of triggering the chaos.


In a desperate attempt to evade paramilitary forces and vigilantes, Jinx and her siblings find Toby and make a break for Mexico. With seemingly the whole world working against them, they’ve got to get along and search for the truth about the attacks—and about each other. But if they can survive, will there be anything left worth surviving for?

Day Zero is the first installment in author Kelly deVos's Day Zero Duology. 17-year old Susan "Jinx" Marshall is the daughter of Dr. Maxwell Marshall aka Dr. Doomsday who wrote the book called Doomsday Guide to Ultimate Survival. Jinx and her brother Charles grew up spending weekends drilling with their paranoid father for a doomsday she’s sure will never come. She’s an expert on self-heating meal rations, Krav Maga and extracting water from a barrel cactus. Now that her parents are divorced, she’s ready to relax.

Her big plans include making it to level 99 in her favorite MMORPG and maybe spending the weekend with her new hunky stepbrother, Toby. Trix, along with her step-sister MacKenna, and brother Charles, end up in the middle of chaos after they stop for supplies, only to witness the bank where their father works coming down around them. For Jinx, survival training immediately kicks in. She knows that keeping calm with likely allow them to survive. She's knows that there is no guarantee that anyone will come to their rescue. She knows that staying together, means staying safe.

When her step-father (Jay) is arrested for the explosions and her mother (Stephanie) taken as part of the investigation, coinciding with a man name Tork relentlessly pursuing her, Jinx knows their only chance of survival is finding her father who has a strange relationship with the man, Ammon Carter, who is the new President of the country. But, Jinx also finds that a character named Navarro seems to be everywhere that she goes. Is he an ally, or something more nefarious? Navarro has long connection with the good doctor. This is a world where two political parties that exist.

One is called “The Spark” whose candidate was David Rosenthal, his campaign slogan was “Everyone’s for Rosenthal”. The Spark (Socialists) is all about taking from the rich and giving to the poor. The Spark nationalized the medical industry which unfortunately isn't that it's cracked up to be. The problem with the Spark is that children like Jinx's brother who has Type I Diabetes, is unable to get the life saving treatment that could save his life. Jinx' spends a whole lot of time trying to keep Charles alive by forcing him to eat.
People in this reality believe that Carter cheated in order to win. Does it ever end? As the world crumbles all around her, Jinx must lead her siblings on a deadly journey to safety to Mexico, weaving their way through the clutches of military might, the vigilante opposition and the minefield of deceit from those she should trust the most. There are plenty of surprises, especially the ending, to keep the story from going off the deep end. In all fairness, the first part of this book was by far the most exciting. Everything kicks into high gear. However, I am already sick of the current reality of political shenanigans, and this just stokes more hatred than it does to rally people.