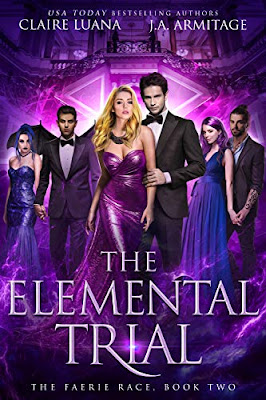 The Faerie Race has proven more grueling and deadly than Jacqueline thought possible. With one trial down and two to go, it seems the reality show’s producers will stop at nothing to get their ratings—even murder.

It will take all of Jacq’s cunning to get through the next trial unscathed, but all she can think about is her discovery that her sister is alive. Too bad her search for answers has only left her with more questions, and more enemies.

Forced to work side-by-side with their beautiful and duplicitous competition, Orin and Jacq are plunged back into a magical world filled with bizarre creatures, far-reaching conspiracies, and not nearly enough to eat. Each challenge brings the two of them closer—but that just means they have more to lose.

Will Jacq be able to reach the final checkpoint with her heart and her life intact, or will The Elemental Trial prove too daunting?

The Elemental Trial, by co-authors Claire Luana & J.A. Armitage, is the second installment in The Faerie Race. The story picks up right after the first trial ended. After surviving the first stage of the Fantastic Faerie Face which saw several contestants die and several others drop out before being killed, Jack and her teammate Orin have only hours to prepare for the next stage. Both Jacqueline Cunningham and Orin Treebaum desperately need to win in order to be granted a boon by the Faerie King. Jacq needs it to find her sister, Orin needs it to free his parents.


But, before the stage can even begin, Jacq is ambushed and nearly kidnapped before escaping. Jacq is also coming to terms with the fact that she has magic after restraining and and forgetting about it for years. Once upon a time, both human and faerie worlds were connected. Magic was everywhere. Magic and technology, however, do not mix and therefore it would be stupid to open the gates to allow magic to return. Reunifying worlds would also plunge humanity into the dark ages. Unfortunately, one group, the Brotherhood, apparently wants to do just that by undoing divisions between worlds.


This stage of the race will take contestants to the Court of the Sylphs. Contestants will have to best the sylphs smartest mind in order to advance and stay in the race. The sylphs are notoriously fond of games and riddles. The Court of the Sylphs is where Jacq learns that her sister is still alive and here in Faerwild. But, why? Why hasn't she tried to contact her own sister who has been worried sick for 2 years since she went missing? She also learns that certain members of the FFR are connected to the Brotherhood.

The second part of the Elemental Trial will force the contestants to journey to the land of the Merfolk. It has become clear as water that someone is doing everything they can to make sure that Tristam and Sophia will win the challenge. Jacq still hasn't been given a new ring after using it to save contestants. Items that are supposed to be used in order to survive underwater don't work or are intentionally sabotaged. The Merfolk hate the Faerie King and decides to make the FFR contestants pay for their transgressions. Chao ensues as Jacq and Orin fight to survive against a stack deck of cards.

Once again, the authors have created a race that is similar to the Amazing Race with danger, action, romance, and twists galore. I have to say I am glad I choose to read this trilogy. The trials are dangerous. The contestants are dangerous. The producers of the show have apparently lost all control of what they intended the FFR race to be. Too many people find themselves in harms way which is not suppose to happen. What Cass is up to remains a mystery. Jacq and Orin clearly have a target on their backs. It's only a matter of time before all the questions are answered.