#Review - Cloak of Night by Evelyn Skye #YA #Fantasy 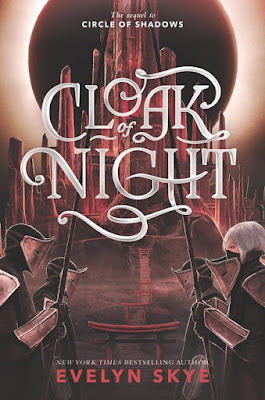 The stunning sequel to Circle of Shadows, a fantasy series full of magic and betrayal—from Evelyn Skye, the New York Times bestselling author of the Crown’s Game series.

After the devastating Ceremony of Two Hundred Hearts, Sora, Daemon, Fairy, and Broomstick are truly alone in the fight to save their kingdom. Empress Aki is missing, and everyone else who could help them is a prisoner to the Dragon Prince’s mind control.

At least Sora understands what they’re up against. Or so she believes, until she overhears the Dragon Prince bargaining with the god of war for immortality and learns that ryuu magic may be a more insidious danger than she realized.

Suddenly, the stakes are higher and even more personal for Sora—not only must she stop a seemingly indestructible Prince Gin, but she must also unravel the secrets of ryuu magic before it is too late for nearly everyone she loves.

And as Sora, Daemon, Fairy, and Broomstick face dangerous obstacles at every turn, the greatest challenge may be discovering who they truly are, and what, if anything, they are capable of.

The fate of a kingdom rests in their hands. Full of dangerous action, heartbreaking romance, and incredible magic—Cloak of Night is the exciting end to this thrilling duology.

"Self-doubt is a ghost that feeds on fear, start if with bravery, and you'll prevail."

Cloak of Night is the second and final installment in author Evelyn Skye's Circle of Shadows duology. In this finale to the fantasy duology that began with Circle of Shadows, the author has created a story full of jaw-dropping action as well as a bit of a twisted romance. The story picks up after the devastating events of the Ceremony of Two Hundred which saw Empress Aki dethroned by her own brother, Gin making a deal with a God named Zomuri to purse his dream of bring Evermore to the entire world, and hypnotizing the entire society of Taiga which are the best fighters in the land to fight for him.

Except, that is, for the four members of the league of rogues who fled with their lives. From the dangerous and talented Sora is dangerous and talented and the leader of the group of rogues who has always been the smartest one, but also the one who loves to create mischief. She's been given the ability to become invisible using ryuu magic after a confrontation with her sister who she thought was dead; Daemon, a powerful boy with a mysterious past who can shift into an electric flying wolf; Fairy is Sora’s best friend, a relentless flirt and brilliant poison-master; Broomstick has an uncanny ability of creating explosives.

Hana aka Virtuoso is Sora's younger sister. She chose blood, glory, Evermore and Gin over her family. 10 years ago, she was taken from a nursery during the Blood Rift that tore the country into factions and became Gin's second in command. There might be hope for her after a heart breaking event happens that proves to Hana that she's on the wrong side of the war and Sora was right all along. Aki is the dethroned Empress who knows the only people who can help her are Sora and her friends. As long as she remains alive, there is hope that she will be able to regain her throne and stop a huge mistake from going forward.

Meanwhile, Gin, who stole the ability to see magic from the afterlife, is going by Emperor Gin now. He is in complete control of Kichona and the people have fallen under his sway. Gin wants more power. He summons Zomuri, God of Glory, and asks for help. The plan is to capture the leaders from all the kingdoms and give the hearts to the God. In return, he'll be immortal in what's known as Evermore. Gin has used his powers to create an army loyal to him by hypnotizing them. But, Sora, Daemon, Fairy, and Broomstick might be the straw that broke the camel's back if they can stick together.

Overall, I thought the story could use a bit more pacing but was happy that another character named Liga, aka Alligator Constellation, was added to the mix. Liga's participation gives the story a bit of depth and humor as he tries to teach Daemon about his magic and his heritage. I thought it was good that Sora and Hana found a way to reconnect. Hana always looking up to her sister but turned mean spirited when she was taken by Gin. I was glad that the author finally understood that even though Sora and Daemon were Gemina bonded partners, that they could also be romantically linked. Never did understand the Fairy/Daemon link and glad it was sort out.