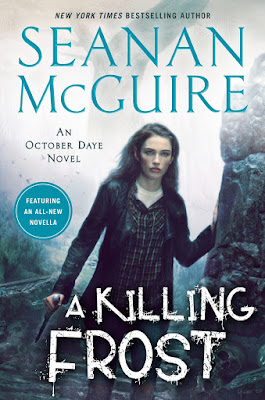 When October is informed that Simon Torquill—legally her father, due to Faerie's archaic marriage traditions—must be invited to her wedding or risk the ceremony throwing the Kingdom in the Mists into political turmoil, she finds herself setting out on a quest she was not yet prepared to undertake for the sake of her future.... and the man who represents her family's past.

A Killing Frost is the 14th installment in author Seanan McGuire's October Day series. This book picks up 6 months after The Unkindest Tides. In summary, Toby is engaged to marry Tybalt, the King of Cats. She is an investigator that can straddle both these worlds. She is also a Dóchas Sidhe, meaning that she can change the composition in the fae’s blood, can read memories in blood, and can taste every fae’s magic through their blood. She's the daughter of Amandine the Liar, firstborn daughter of Oberon, absent Lord of Faerie.  Unlike her mother, and her half-sister August, Toby is was born mortal but is now leaning heavily towards going full Fae after she's had to change the composition of her blood to survive. She's a knight errant and a recognized Hero of the Realm, thanks to Queen Arden Windermere in the Mists Knight. Toby has a chronic inability of not minding her own business which usually means she's covered in someone's blood or hers by the end of the story. Very much like Jennifer Estep's Gin Blanco.

As this story opens, Toby and May are preparing for Toby's hopefully soon to be announced date of her nuptials which is supposed to take place sometime during this series. Maybe. Maybe not. Everyone pretty much thinks that Toby is going to renege on the deal and break it off. But I digress. Toby gets a strange phone call from Karen, Toby's friend Stacy’s middle daughter who is a soothsayer. Karen tells Toby that she's going to look for someone she's lost. She's going to want to take everyone she can with her, but she can only take May, who is her retired fetch and now her sister, Quentin, her squire and Crown Prince of the Westlands, which is what Faerie calls North America, and Spike, the Rose Goblin. She's warned that she can't take Tybalt with her or people will die. As Toby and Tybalt are having a romantic dinner, a truth bomb smacks Toby upside her head. Of course, there's always a catch when it comes to Toby's happiness. You see my kind and wonderful readers; Toby can't legally get married until she gets the approval of one Simon Torquill who is under Fae law her actual father since he's still legally married to Amandine. Simon who is the twin brother of Duke Sylvester Torquill of Shadowed Hills.

The same Simon who turned Toby into a fish for 14 years and destroyed the life she'd been trying to build outside of Faerie which led to her losing her only daughter.  If Toby doesn't get Simon's permission, someone could consider it a very public insult and demand recourse. Simon is lost in the darkness after giving up his way home so that August can return instead and who very much wants to murder Toby because of his loyalty to Evening Winterrose. Putting aside the fact that everyone but Toby knew that this was coming and failed to tell her, doesn't sit well with Toby or with me for that matter. Toby must dig deep and rely on fickle allies like Sylvester and his wife Duchess Luna who have come to be antagonists instead of allies. She must find Simon, convince him to come home, and in a bitter pill to swallow, Simon can only be released from Luidaeg, the sea witch's curse if he finds her father Oberon. What will Toby do?

Fairness in reviewing, I did not read the novella at the end of the book as I normally would do. Just didn't have the patience or the time to read about Patrick, Simon, and Duchess Lorden. Must be said, that was a surreal ending. Everything is about to change now. Lines are being formed. Enemies are soon to be revealed. An entire new chapter in Faerie is about to begin and who knows what it will bring along with it. It is very unlikely that Toby will be marrying Tybalt any time soon. We still don't know what really happened to the missing Queens Titania and Maeve. Readers need to be prepared for the next chapter in Toby's adventures.