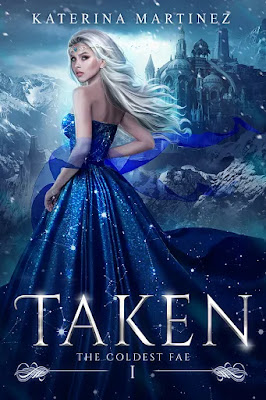 In Arcadia, winter has no heart.

I make magic dresses for a living. I’m not rich or pretty enough to wear them, but I love what I do, working out of my family’s shop on Carnaby Street in London—until the fae show up.

It’s a straight-up kidnapping, and before I know it, I’m brought to this wintry place of cold hearts and beautiful nightmares, but that’s not the worst part.

The worst part is, they think I’m fae, and I’m supposed to participate in some competition against a host of other women who have been training their whole lives for this. The prize? The winner is to marry the Prince.

On the surface that sounds almost like a fairytale, only this competition is brutal and bloody, and the Prince is the jerk that kidnapped me. I can’t get too close to him or he’ll know I’m not fae, and then I’m dead. But I want to get close to him. His body burns with the fire of a cold star, and I’m drawn to him.

I need to fight the pull and survive long enough to find a way out of here, but these winter fae won’t make that easy.

Taken is the first installment in author Katrina Martinez's The Coldest Fae series. Dahlia Green was raised by three women, all mages, who she calls mother after being orphaned by unknown parents. She works as a seamstress in The Magic Box on Carnaby Street in London which apparently is a real place according to the author. She can make dresses made out of magical thread. While returning home from a disastrous meeting with Madame Lydia Whitmore of Whitmore's Academy of Ballet, she is bumped into by a stranger who calls her Belore.

Said stranger returns with a bunch of Fae soldiers and kidnap her. Dahlia believes she is human, but you have to admit that having three mothers is a bit on the curious side. (Think Princess Aurora and 3 fairy godmothers.) The Fae soldiers are led to believe that Dahlia is one of them but has been hiding out in the Human realm. After she is taken to the Winter Court of Windhelm, she is told that she has to compete in a royal selection competition against other women who have been training their whole lives to win and marry Prince Cillian Wolfsbane.

Dahlia can’t tell anyone she’s human or she will likely be killed. Unfortunately, there’s the usual mean girls who appear to throw Dahlia into believing she has no chance and try to make her life even more difficult than it already is. Dahlia has a pixie named Gullie who hides in her hair. She is given a guardian named Mira who despises Dahlia but has no choice but to try to help her survive against great odds. The most curious aspect about this story is that once you write you name in what’s called the Frost Stone, you are accepted into the competition.

To be accepted into the competition, you have to be Fae. While Mira uses glamour to make her look Fae, over the course of the story she begins to look the part and I was left wondering who her parents were since you can only be selected to this Selection at birth. I don’t normally read books like these but I do like the author. I consider this story a cross between the Selection and the Bachelor but with Fae and Magic and deadly games and a girl who has no clue what she’s doing or how she is going to survive. As with the Selection and Bachelor, at least they had time to prepare and weren’t kidnapped and taken into Fae where she has no allies and little hope of winning except for a miracle. 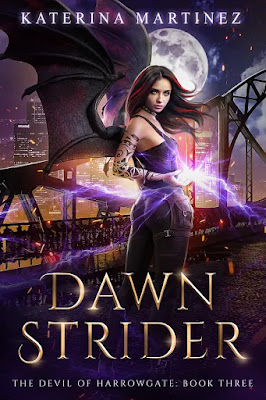 I just found out someone royally messed with my brain, and now I don't know what to believe. The man known only to me as Calder didn't unlock my memories, he implanted false ones.

The Obsidian Order didn't send me here to kill the Horseman; I had been missing for so long, they thought I was dead.

My whole reason for being at Harrowgate was a lie, but now I was here, and things were starting to get really dangerous. Inmates are dying asleep in their cells left and right, the guards are terrified to fall asleep, and no one has seen the Horseman in a week.

The Horseman is the only one who I think can help. I need to find him, but I also need to make sure I don't fall asleep.

Otherwise I could end up being dragged out of here in a body bag.

Dawn Strider is the third installment in author Katrina Martinez's The Devil of Harrowgate series. Things have changed for Six. She's recently been told by her friend Azlu, who is an Arachnon, that Selene and the Obsidian Order thought she was dead. They didn't send her to kill the Horseman, the man she has fallen for, instead, she had her memories twisted by a man who has since disappeared. Six came to this realm 10 years ago. Since then, she's been incarcerated for a crime she didn't commit, enslaved by a group called the Crimson Hunters, manipulated, and abused.

She’s been an agent for the Obsidian Order, which is called an Outsider faction, she’s been a scout, a spy, a warrior, and an assassin. After spending a week in the hole, Six returns to D-Block and her roommates Alexa and Azlu. She learns that prisoners and guards are dying in their sleep, murdered by a monster that nobody can see but in nightmares. Six ends up fighting a monstrous thing that is a cross between bat, man, wolf, and bull. She also has to try to save the Horseman who she knows is not the man she was told he was. He’s much more powerful and dangerous.

While Six and her friends, including Guard Sanchez, are trying to battle the unseen fiend, another group of individuals is trying to break into Harrowgate and rescue her and Alexa. This group includes Selene, leader of the Obsidian Order who is a legend and an Aevian Outsider. She once saved the world from a catastrophe of global proportion. She hates the Coalition which means that she must confront Warden Wright who is a powerful mage. Along for the ride are Aaryn, a Knight, along with Alexa’s brother RJ, and Izzy who is a wardbreaker. They quickly learn that something is definitely wrong her. Not only are prisoners dying of an unknown, but it appears the prison itself is sucking the life out of the prisoners as well.

This book is fairly short. You could have combined the first two books and then books 3 and 4 and made a full-length novel instead. But I will continue to read the series nonetheless.