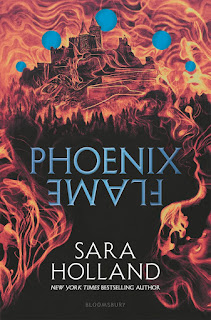 Bestselling author Sara Holland continues her blockbuster contemporary fantasy series about the Inn at Havenfall with this unforgettable sequel.

Maddie thought her problems were over. She saved the Inn at Havenfall—a sanctuary between magical worlds—from the evil Silver Prince. Her uncle the Innkeeper is recovering from a mysterious spell that left him not quite human. And there are still a few weeks of summer left to spend with her more-than-friend Brekken.

But there’s more work to be done to protect the Inn—Maddie must put an end to the black-market trading of magical objects and open the Inn’s doors to the once feared land of shapeshifters.

As she tries to accomplish both seemingly impossible tasks, Maddie uncovers secrets that could change everything. What if saving everyone means destroying the only home she’s known?

This next breathtaking fantasy from the bestselling author of Everless is perfect for fans of Melissa Albert and Holly Black.

Phoenix Flame is the second installment in author Sara Holland's Havenfall duology. Phoenix Flame picks up just days after where Havenfall ended for readers. Maddie Morrow may have saved the Inn at Havenfall, (a sanctuary between magical worlds deep in the mountains of Colorado), from the treachery of the Silver Prince, but it was only the beginning of a longer game with deadlier consequences. The good news is that her uncle Marcus, the Innkeeper, is finally awake, and his regained control over the Inn.
The bad news is that her new friend Taya was pushed through the now closed door to Solaria with no way of retrieving her. Maddie knows that there's more work to be done to protect the place her family has run for centuries. The peace accords between Fiordenkill, Byrn, and Haven seem to being going well, but one mistake could be costly. Maddie focuses her attention on the Solarians who were kidnapped like her own adopted brother Nate. Maddie uncovers family secrets that could change everything. Maddie believes that her mother’s past my hold the key to stopping the soul trading that has plagued the realms.
After visiting with her mother in prison, it becomes clear that Maddie needs find a man named Cadius. In order to do so, she must travel to Fiordenkill where Humans can't survive for long. With a little help from her friends, Graylin and Brekken, Maddie arrives in Fiordenkill in disguise. Maddie hopes to further disrupt the black-market trade of soul-bound silver as well as finding something called the Phoenix Flame which legend says it can be used to travel between realms. Soon thereafter, she runs into someone who she thought was dead. (Spoiler: Her brother Nahteran).
Once again Maddie is meant to make some hard choices, and yet, those around her have to pay the price. What's worse is that the Silver Prince isn't finished yet, and makes a move that nobody could see coming. What's baffling for me is that Maddie found out that she had magic but barely uses it except for one particular scene. What's the point of having magic and not using it? The plot is interesting, with a few twists and turns and decent character development. But the world-building and description continues to leave something to be desired except for the beginning of the book.
I know that Phoenix Flame is meant to be the end of this duology, but there is still so much that feels unfinished. I’m conflicted about the ending as well as the epilogue that features Taya and Nahteran aka Maddie's brother. For those who are wondering about the labels for this book, it's because Maddie is bisexual. She lives her life and just happens to be bisexual. The book is not super romance heavy, but when she talks about her crushes one is a guy and one is a girl.