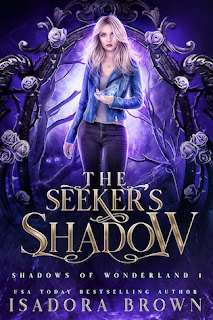 All magic has been forbidden from Wonderland after the Mad Mage was banished twenty-four years ago. But some still use it in secret, for the worst sort of purposes.

Twenty-three-year-old Alice Wynter, daughter of the chief of police, can’t wait until she can get out of Wonderland. As the only person in the entire town who doesn’t have magic, she’s never felt as though she belonged. It doesn’t help that her best friend was murdered a year ago.

When Rumpelstiltskin himself asks her for a favor, she can’t refuse. However, she soon realizes he thinks the man convicted for her best friend’s murder is actually innocent. Alice isn’t sure she wants to entertain that idea, considering the fact that her father was the officer who arrested him and the reason he was promoted to Chief of Police so quickly.

In order to obtain justice for her friend, Alice must look at the clues with an open mind to the truth. Bodies are meant to stay buried but ghosts live on - until their restless spirits are finally given peace.

With the grittiness and mystery of Riverdale and the magic and romance of Once Upon A Time, The Seeker’s Shadow is a captivating urban fantasy mystery readers are sure to be enchanted by!

The Seeker's Shadow is the first installment in author Isadora Brown's Shadows of Wonderland series. 23-year-old Alice Wynter is the adopted daughter of the Wonderland Chief of Police, and the only non-magic human in the entire town of Wonderland. It's has been one year since Alice's best friend, Anna Skaarsgard, was murdered. Her alleged killer is in prison having admitted to the crime. Since Anna's death, Alice leads a lonely existence without any real friends, just co-workers. Alice has been saving money trying to get out of Wonderland and the Disdain that’s been thrown at her since her adoptive father bought her here.

Alice is known for finding things other people might not be able to find, except her biological parents who she's still searching for. She also wants answers as to how she ended up in Wonderland in the first place. Which is why it's so shocking when the most feared man in Wonderland, Rumpelstiltskin, a man nicknamed The Imp because you are not supposed to say his name out loud, doesn't believe that Beast, who her own adoptive father arrested for the murder of Anna, is actually guilty of Anna's murder. Rumpel knows that something else is happening and needs Alice's help to prove that his theory is correct.

Alice is tasked with locating a picture of a rose that is supposedly evidence to prove who really killed Anna. To make things even more troubling, Alice is confided in by Ella Byrne, don't ever call me Cinderella! about a sexual assault that allegedly happened at the home of one Stephan Charming. What's especially sickening is that it appears that someone wiped Ella's memories of the entire party which leads to Alice believing that someone is using outlawed magic. Enter Jack Lapine who blamed Alice for Anna's death and will eventually turn Alice's world on its head with a shocking revelation.

In Wonderland, it has been 25 years since the Red Queen banished all magic thanks to the Mad Mage. The Red Queen directed that anyone who uses Shadow Magic gets no trial. They are just put to death. Could the Mad Mage be back? With a little help from Peter the Dwarf, known as Grumpy, the pieces slowly merge together, and Alice finds the culprit responsible for Ella's attack. But there's still a whole bundle of unanswered questions that remain unsolved. Why would Rumple ask Alice to help him instead of doing the work himself?

What makes Alice so special? Why did Jack blame Alice for Anna’s death when Alice doesn’t have any magic? Why was he such an ass and now apparently knows secrets about Alice that he can't tell her without the wrong people knowing? What is up with the Cat Chess who was Anna’s cat? Where is the White Queen who disappeared with the Mad Mage? What was up with the out of the blue job offer given to Alice? Was it to keep her from discovering more truths? Why was the villain of the story told not to hurt Alice? Will Paul actually tell her the truth about who her parents were? Will Beasts sister Gianna be helpful proving her brother’s innocence?

I borrowed this book for free via Kindle Unlimited and yes, these are my own opinions. The next three books are not free and therefore I shall have to pause this series for now. I do want to see how the author gets the questions that I stated above. Would make me feel better about letting for until these books are free or available on Kindle Unlimited.