#Review - The Stolen Kingdom by Jillian Boehme #YA #Fantasy 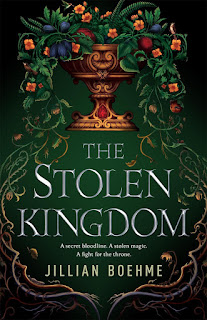 Two teenage heirs play a deadly cat-and-mouse game to claim the throne in this exhilarating, standalone YA fantasy for fans of Victoria Aveyard

Maralyth Graylaern lives a sheltered life on the family vineyard, wielding a forbidden magic that enables her to predict the harvest, peer into the past, and heal the vines from fatal blights. That is, until she's abducted and learns that she is a direct descendant to the throne of Perin Faye. In order to embrace her birthright and claim her throne, she must first destroy the remaining heir.

Alac Thungrave has lived his life as the “spare” prince, second in line to the throne of Perin Faye after his brother. When an attempted coup takes the life of the king and his heir, Alac is stunned to learn that the girl he recently befriended is the would-be usurper.

Duty forces Maralyth and Alac to engage in a deadly cat-and-mouse game, each determined to execute the other, despite their growing feelings of attraction.

For a hundred years, the once-prosperous kingdom of Perin Faye, has suffered under the rule of the greedy and power-hungry Thungrave kings including King Selmar II. The Thungrave's hold corrupted magic and rule over the kingdom which has suffered every year they've held the crown and has been responsible for the Black Death. This is a story told by two main characters: Maralyth Graylaern and Alac Thungrave. 17-year old Maralyth is a young woman living in a small village with her father and brother, together the family and a couple other villages run a winery called Graylaern Vineyards.

But Maralyth has a secret. With her whispers, she can make crops grow and ripen which makes the family's vineyards the best tasting in all the land. She inherited her powers from her mother Tessa, but she gave her word not to share her ability with anyone and keep it as a secret from her father and her brother. After Maralyth is kidnapped and brought to the estate of Lord Nelgareth, Maralyth is told of her bloodline. With a bit of persuasion, Maralyth agrees to a scheme to bring down the reign of the King Selmar II and his family once and for all.

As a direct descendant of the Dallowyn's, Mara is told that her magic is her greatest asset. She's easily manipulated and naïve to a fault and is catapulted into a deadly plot to take the throne. Mara will eventually make interesting choices which puts her at odds with the people who put her in place to do what needed to be done. She will have to gather her own people who she can trust, including her brother Nestor to stand by her side against Alac who has his own story to tell.

Alac Thungrave, the king’s second son, has always been uncomfortable with his position as the spare heir—and the dark, stolen magic that comes with ruling. Alac doesn’t approve of his father’s policies or the dark magic. His dream is to one day own his own vineyard which seems to be a central theme of this book. Alac was never interested in court or the people of it, until Maralyth arrives on the arm of Lord Nelgareth.

While Alac and Maralyth are playing their own game of cat and mouse, there are deadly twists and betrayals while the climax of the story takes an unexpected turn involving Prince Cannon, Lady Ellian, Prince Alac, as well as Maralyth. The romance between Alac and Maralyth is challenging to the point where I was waiting for the next shoe to drop. I was believing that this would be another feminist story where the woman kicks the man to the curve and goes on her own journey instead. While I won't tell you what does happen, I will say it kind of affected my review in that it was unexpected and unnecessary.

Generally speaking, this will probably be a hit or a miss for most people. Personally, after 11 years of waiting for the next book, and then the next to complete the series, it's refreshing to be able to read a standalone without cliffhanger endings, or what will happen next to the characters because the series was dropped, or it's been years since the previous installment was released.

Thanks to NetGalley for sending me an arc in exchange for an honest review.