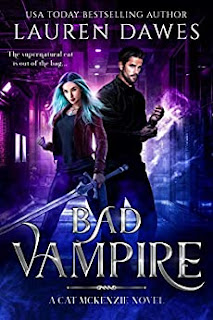 A rookie cop. A team of supernatural detectives. Recalcitrant baby vampires on the loose.

My name is Cat McKenzie, and I’ve been a very bad girl…

Nope, my kind of bad got my partner killed on my first day of the job. And now I’m getting punished by being thrown in as human liaison to PIG — the Paranormal Investigative Group.

Seriously, what were my superiors thinking?

I’m not going to lie: I hate all supernatural beings, but especially those cocky ones like my new partner happens to be. Between baby vampires terrorizing school events, my truck getting totalled and demon sex clubs, I wonder who the hell I pissed off in a different life.

But when the vampire threat becomes personal, I'm hell bent on getting to the bottom of it.

Bad Vampire, by author Lauren Dawes, is the first installment in the authors Cat McKenzie series. Dawes main character is Cat McKenzie. She's a rookie officer who on her first day of work, lost her partner to something that is still at large. After a forced 7 day leave, Cat is transferred to PIG. (PIG stands for Paranormal Investigative Group). Cat is designated as the human liaison officer where she will spent 12 months. For Cat, this is a major slap in the face since she absolutely is terrified of supernaturals. Cat will be the only human among this group of supernaturals who all know what happened to her.

Her new partner, Detective Sawyer Taylor, is something that makes her heart beat fast. Cat was really given a bad break. After she witnessed her partner being torn apart by one of that things that go bump in the night, she did what any other human confronted with the impossible would do, she froze. Now Cat has to deal with a new partner, a sword which seems to be attached her her, and an Opal pendant that seems to get brighter when she's around a supernatural.

For Cat's first case with Sawyer, baby vampires or Renfields, seem to be trying to lure out other children and they apparently have Cat in their sights for some reason. Add in a never-ending series of oddities happening around Cat, and Cat is wondering what will happen next, and if she'll end up like her former partner before her time in PIG actually gets started. The dynamic between Cat and Sawyer is intense, but the more they are round her, Cat realizes that Sawyer isn't the person she thought he was. After all, who gives their partner a sword that becomes a part of you whenever danger is around?

Cat's world gets bigger when she starts to grow closer to her new squad mates including Braxton. Cat is introduced to vampires, succubus', demons, and werewolves. Any of these supernaturals could literally eat her alive. Cat’s first-person point of view shows off her snark and attitude while keeping her an extremely sympathetic character. Cat lost both her parents to strange circumstances and she never found out what happened to either of them. She was given an Opal pendant by her father and told to keep it on no matter what.

The mystery of her parents disappearance really changed Cat's life. You'll have to excuse her for being a bit on the snarky side. She hides behind her insecurities by making light of the situation. Even though she does kickboxing training, her sword may be her most important asset. While the story wraps up with a nice ending, there are a whole lot of questions remaining, especially about what or who her parents were, and if the sword calling to her makes her more interesting.