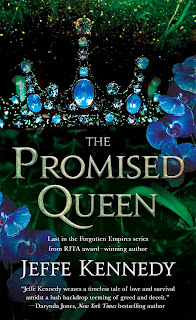 Claim the hand that wears the ring, and the empire falls.

Conrí, former Crown Prince of Oriel, claimed the hand that wears the Abiding Ring, but the prophecy remains unfulfilled. Queen Euthalia of Calanthe returned to her island kingdom, but broken in mind and body. With the blood of war unleashing ancient terrors, Calanthe isn’t the haven it once was. Lia must use her magical bond with Calanthe to save their people while Con fights to hold off the vengeful Emperor Anure and his wizards. Con and Lia will have to trust in each other—and in love—to fend off ultimate disaster. In the thrilling finale to the Forgotten Empires trilogy, the fate of the world hangs in the balance as Con, Lia, and their allies sacrifice everything in a final bid to destroy the corrupt empire.

The Promised Queen, by author Jeffe Kennedy, is the third and final installment in the authors Forgotten Empires trilogy. Once again, this story features two main characters: Conri, former prince of Oriel, and Euthalia, Queen of Calanthe.
Conrí claimed the hand, Lia's that wears the Abiding Ring, but the prophecy remains unfulfilled. Euthalia, Queen of Flowers, returns to Calanthe a changed woman. With the blood of war unleashing ancient terrors, Calanthe isn’t the haven it once was. Even more worrying, Emperor Anure and his wizards still hold an unknown number of hostages to keep control of the land that they seized.

Conri gave up his chance at revenge against Anure when he saved Lia. But now that he knows his sister is still alive, and being held hostage, he knows he has to finally take on the false emperor and destroy his power. Conri feels guilty for putting Lia in danger and each day that he sees her struggle to get back to normal, leaves him feeling helpless. He wants to be the person she turns to for comfort and support, but he doesn’t blame her when she turns him away. Lia feels guilty for putting Calanthe, and her people in danger and feels vulnerable while her body is so weak.

Her brief time as a captive has opened her eyes to the world’s plight. She must come to terms with her true nature before she can assist Conri in defeating Anure. She knows she's hurting Conri by pushing him away, but feels their situation is hopeless while she and Calanthe are so weak. She's lost in a muddled-mental-nightmare, the island is dying and sending the entire kingdom into chaos. To make matters even more twisted, the marriage bond between Conri and Lia has been broken. While Conri tires to find a way to help Lia heal, there's still the question of what to do now that he knows the plans of the one who took her captive.

Lia has to ask for help, but who can she trust? Can she finally find a way to become the person she needs to be, or will her luck finally run out and her people end up suffering even more? The most obvious question of this entire series is what is Lia? Is she human? Is she a Goddess? Or, is she something never seen before? Lia and Conri have had a rocky start, and there is still some emotion baggage that needs to be fixed, but now they must fully trust and want each other. Will love finally conquer all? You will have to read the book to find out!

Conclusion: The final confrontation between Conri, Lia and their allies, vs the false emperor was pretty disappointing as well as predictable. The good part is that the rollercoaster ride of emotions between Conri and Lia has finally be resolved in a way that makes sense.