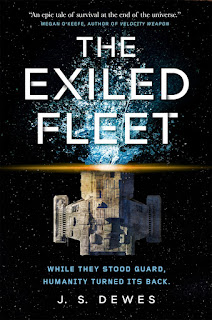 J. S. Dewes continues her fast-paced science fiction action-adventure with The Exiled Fleet, where The Expanse meets The Black Company—the survivors of The Last Watch refuse to die.

The Sentinels narrowly escaped the collapsing edge of the Divide.

They have mustered a few other surviving Sentinels, but with no engines they have no way to leave the edge of the universe before they starve.

Adequin Rake has gathered a team to find the materials they'll need to get everyone out.

To do that they're will have to evade a ruthless enemy and find new allies. Some of them will not survive.

"While they stood guard, humanity turns its back."

The Exiled Fleet is the second installment in author J.S. Dewes' The Divide Series. This series focuses on two main characters, and dozens of secondary characters. Sentinel Cavalon Mercer and Excubitor Adequin Rake are the main characters, while Jackin North, Mesa, Puck, and Owen Larios are important secondary characters. Adequin and her people survived a catastrophe in the previous installment that left her lover dead. Hundreds of Sentinels are dead, and Adequin puts the blame on her shoulders.

If you've read the first book, which I dare hope you have, Adequin made a choice that got her banished to the Divide. Now the Divide is moving in and expanding and anything in the way is being destroyed, including Sentinels who don't know they've been abandoned by higher ups. What's interesting is that while she was only gone for 5 weeks, in reality, she was gone 6 months. As hard as she tries, Rake can't rescue everyone and she does make mistakes. Hundreds of Sentinels have died but more would have died if she had done nothing. In essence, Rake has created a rebellion against those in charge which include Cavalon's grandfather.

Even though his secret heritage has been exposed, Cavalon has become a key piece in the puzzle. He's a brilliant astromechanical engineer who is trying to build an actual star as a power source on the ship, and if he’s successful, they’ll have enough power to make a jump to the Kharon Gate for much needed supplies. Unfortunately, the jump drive uses a rare material which Rake and her team are forced into traveling hundreds of light years in order to find.

While Cavalon and team works on the Typhos’ jump drive online, everyone else onboard contends with diminished rations and the temporal anomalies caused by their proximity to the Divide. With 4,000 rescued Sentinels onboard, rations are being cut back every day. After Adequin Rake returns from restarting the last of the mysterious Viator generators, she realizes that unless she does something, she is likely to be tossed out into the Divide.

The need for supplies soon forces Adequin and her team to venture back into populated space on “a hundred-million light-year errand.” Along the way, a deeper exploration of the motives of the hostile alien Viators adds complexity that nobody could see coming. Thankfully, Adequin's actions 5 years ago has earned her a bit of respect from those she is supposed to be at war with.

We also get a bit more background on not only Adequin, but Jackin North which leads to yet another revelation and an entire new group called Corsairs who are basically smugglers. To top it off, after encountering his diabolical Grandfather, Cavalon uncovers a disturbing secret about his own childhood. In my opinion, one of the best things the publisher did was release books # 1 and # 2 within months of each other. I love that because for an elderly reader like me, it makes it easier to remember key events and key characters without having to resort to digging up old notes.

There is a whole lot to this story. New characters push their way to the front, old characters find themselves in trouble, twists, and turns, and surprises are at every turn, but the story doesn't get bogged down with unnecessary over the top science fiction lingo that often leaves a reader flabbergasted.