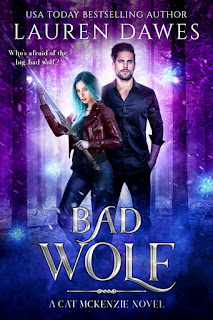 A rookie cop. A team of supernatural detectives. A shifter with some impulse control  issues.

My name is Cat McKenzie, and I thought wood sprites weren’t a thing.

Apparently, they are. Fun fact: they enjoy eating carrion which was how I discovered the body of a hunter in the woods. The local werewolf pack confirms it’s a bad wolf doing the biting.

Add two more to the body count and we have a furry serial killer on our hands.

Life can’t be as easy as that though. From new recruits at PIG to questions about mine and my sexy-as-sin partner’s connection, I’m left trying with more questions than answers.

Murderous will-o’-the-wisps, dryads and a thieving harpy… could life get any crazier?

Bad Wolf, by author Lauren Dawes, is the Fourth installment in the authors Cat McKenzie series. To be fair to rookie cop, and Paranormal Investigative Group (PIG) liaison Cat McKenzie, she's literally only been on the job for a few months. In that time, she's been enlightened by the Paranormal world around her, while becoming consort to her partner Sawyer, who is an incubus. She also carries around, when she's in danger, a long sword called Reaver, as well as an Opal, which was nearly stolen from her, that warns her when she's in trouble.

In the previous installment, it seems as though Cat and Sawyer were headed for another mystery to solve when a young boy was found murdered. In this book, that story continues when several other young men are found brutally killed, and their boss, Wolfe, demands that Cat and Sawyer work the case diligently and quickly so that whoever is responsible, can be caught and brought to justice. Who knew that Cat would run into dangerous Wil-o-the Wisps who lead people into danger, or a Tree Nymph (Dryad), or a Massive Spider, and an even more massive and dangerous Wolf? Oh, right, it's Cat's life, we're just spectators!

And, because of the events of the previous story, Wolfe decides to not only bring in three recruits, but for the first time since she joined PIG, Cat doesn't have to worry about someone destroying her truck over, and over, and over again. Plus Cat and Sawyer are heating up in their new relationship and we learn some interesting new information about their developing and complicated situation.

It’s an amusingly over the top series, with laugh out loud moments and extreme scenes of magical mayhem. Cat and her unicorn and coffee obsessions provide plenty of light-hearted instances, while the interactions between her and Sawyer provide romance and intrigue. But I want Cat, and or Sawyer, to put an end of the harassment she continues to get from her former colleagues.