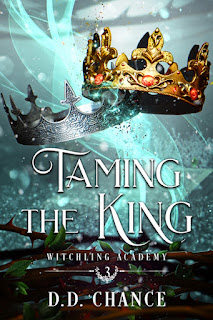 I swore nothing would screw up the alliance I'd finally forged with the king of the Fae. Then I was captured by his mortal enemy.

Marrying the brutally gorgeous, fiercely proud, and irredeemably arrogant High King of the Fae wasn’t on my punch list a few weeks ago, but it was the fastest way to keep my people safe.

Then the Fae’s ancient enemies strike. The darkly twisted king of the Fomorians rips me into his underworld prison…and tells me I’m now his bride, too.

Even worse? Once my beautiful Fae king learns how I’ve unwittingly betrayed him, his only solution is war.

To stop the bloody battle that will destroy two of the most powerful races in all the realms—and take down Earth’s witches too—I’ve got to call in every favor and squeeze every last drop of magic I can from my Hogan blood. It still might not be enough.

Because witch’s hearts are meant for breaking, traitors hide around every corner, and when it comes to Fae, Fomorian, and especially witchling magic—nothing is as it seems.

Taming the King, by author D.D. Chance, is the third and final installment in the authors Witchling Academy series. This story begins right where Tempting the King finished. The story once again alternate's between Belle Hogan and Aiden, High King of the Fae. Belle Hogan is once again in a whole lot of trouble. She's been stolen from the human realm where she was trying to return home to, and taken to the Fomorian realm by those who betrayed her family, where she comes face to face King Lyric who claims that he wants what Aiden believes he already has; A wife.

Take my world for it, it's been a really rough week for Belle as well as enlightening. Her care free life of helping anyone, witches, monsters, shifters, etc, find peace ended in a shocking manner, and suddenly she's the Fae King's Witch even though she tried to break her contract. Each encounter with the Fomorian has left a bad taste in her mouth. They look like creatures from the Black Lagoon. They are darkness, whereas Aiden's people are lightbringers. For this King Lyric to now imply that Belle is now tied to him as his wife, just makes her week even more sickening and devastating.

Even as tempting as Lyric's offer is to open up and access more of her magic, nothing is ever free when it comes to any Fae or anyone else in this world. Meanwhile, Aiden has his hands full trying to figure out how to bring his people together in light of a dangerous enemy making advances into the Fae world while saving Belle. That includes trying to find out what happened to all the books that tell the history of the Fae. It makes Aiden begin to question everything he's been told about Fae history and what really happened between Reagan Logan and his grandfather, King Odin and why no records can be found. Anywhere.

What's even more troubling is that if Aiden goes to war, it will likely affect all realms, including the monster realm, and the human realm where witches have always been the archenemies of the Fae. To make things even more consequential, Belle knows that she is the tool that is being used by various sides in this conflict to get what she wants. Her visions show her hundreds of possibilities and none of them are easy, or pleasant. Who can she really trust? Thankfully, Belle has some ideas which brings her to Chicago, and the House of Swords. Hint Hint

She also gets visited by a person known as the Night Witch who was visiting Boston. Hint Hint. For those who just finished the Monster Hunter Academy series, a character for that series makes a guest appearance. Nope, not spoiling. Belle and Aiden's connection, as well as their magic, grows leaps and bounds in this story. On a side note, I loved that Niall and Celia seemed to have found each other. After everything that's happened to Celia, they both deserve a moment of peace and happiness.

When I received this copy from the author, I was pleasantly surprised when she told us that there would be a few surprises, call them Easter Eggs, in the book. I am eagerly urging the author to please, please do more crossovers in another series since that series seems to be ending soon. This is one of those series that you can't just pick up this book up, and expect to know everything that has happened over the previous two books in the series.

Ain't happening. Instead, this book ties together every single previous storyline into one fantastic, and revealing finale. Did I mention revealing? This series just happens to be the third in the authors Boston Magic Academy cycle which includes Twyst Academy and Monster Hunter Academy.