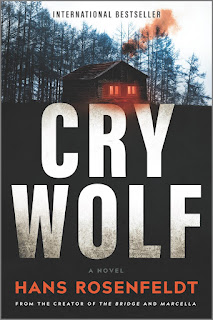 The first book in a new series by Hans Rosenfeldt, creator of the TV series The Bridge as well as Netflix’s Emmy Award–winning Marcella.

Hannah Wester, a policewoman in the remote northern town of Haparanda, Sweden, finds herself on the precipice of chaos.

When human remains are found in the stomach of a dead wolf, Hannah knows that this summer won’t be like any other. The remains are linked to a bloody drug deal across the border in Finland. But how did the victim end up in the woods outside of Haparanda? And where have the drugs and money gone?

Hannah and her colleagues leave no stone unturned. But time is scarce and they aren’t the only ones looking. When the secretive and deadly Katja arrives, unexpected and brutal events start to pile up. In just a few days, life in Haparanda is turned upside down. Not least for Hannah, who is finally forced to confront her own past.

Cry Wolf, by author Hans Rosenfeldt, is written as though it was made for TV. There are tons of characters from primary to secondary to tertiary. Hans Rosenfeldt is the creator of the TV series The Bridge as well as Netflix’s Emmy-winning Marcella. Whether or not this is an actual series, is unknown. With a bit of research, Edelweiss claims this is a standalone. However, the book ends on a cliffhanger and it's being sold as the first installment in a series featuring Hannah Wester who works for the Haparanda, Sweden police.

When two wolfs are found dead, Hannah is on the case to find out who may have killed the wolfs which comes with a steep penalty. When human remains are found in their stomachs, the search is on for a body. When a link is made to a drug deal gone wrong across the border in Finland, a task force is assembled and events rapidly escalate. When a highly trained assassin seems to be cleaning up the drug deal gone back, things get a bit confusing and suspenseful since Hannah and her team are put directly in the bullseye.

Hannah is a character who is 54 years old and experiences the same hot flashes that we all do once we reach a certain age. She fully admits that she has a tendency of jumping to conclusions too quickly, which has led to some personal issues with her husband. She also hasn't exactly been faithful to her husband which is a great big no no in my book. What really drives Hannah is the not knowing what happened to her daughter Elin 28 year ago.

The novel is interspersed with police investigations into the crimes, violence, and the personal troubles of various characters in the novel. I think one of the most interesting parts of this story is that it takes place in both Sweden and Finland which makes for an interesting place to tell a story. A large portion of Haparanda's population speak both Swedish and Finnish and with open borders in the EU, people freely cross to do business on both sides.

Even though there are many plotlines happening at the same time, they will eventually tie back to one particular incident and the key players like Hannah and an assassin known as Katya who was taken from parents who didn't love her, and trained to be a killer by The Academy which we can confirm is Russian in origination. Katya's storyline is excellent and it raises numerous questions and possibilities which I refuse to spoil. The ending is really good, it’s very exciting, there are some unexpected twisty elements, and yes, I do hope there will be a sequel to this story since Hannah is now on a mission to discover the truth about what happened to Elin and who was responsible.