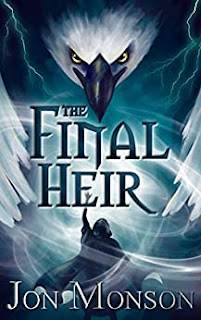 Some call him the Usurper, the Destroyer of Worlds. Mahzun calls himself the Savior of Man. A decade of war has brought him to the precipice of victory.

Zahara, a prodigious mage, is destined to wield the Power of Creation and put an end to the Usurper. But when that power mistakenly falls to Ekarath, her best friend and elite soldier incapable of casting the simplest of spells, destiny must be questioned.

Will the Usurper complete his victory? Or will Ekarath find the strength to be the hero he wasn’t destined to be?

The Final Heir, by author Jon Monson, is the first installment in a yet to be named series. The series follows three main characters from Zahara, Ekarath and Mahzun, aka the villain of the story. 17-year-old Zahara is formally training to become a mage. Ekarath is a young man who is training to become a specialize soldier known as Hundiin who is supposed to protect Lord Dimitri, the last remaining Heir. Mahzun, aka the Usurper, has been fighting for the past 10 years to rid the world of the remaining Heirs.

Zahara, from the region known as Karajaani, which was conquered 5 years ago by the Usurper, is ahead of most people her age thanks to training she received from her mother before she passed. She's also a minor noble. Zahara was ready to take her final test to become a full fledged Mage until the Usurper waged war on her home. She's grateful when she's asked by Lord Dimitri to travel with Ekarath to find Farban, his spy master, deep in the heart of the forest. She's shocked even more when she's named heir to replace Dimitri. But it is Ekarath, not Zahara, that the power of the Heir has found a home with.

Ekarath, who heroically fought against the Usurpers army, is shocked that the Power of Creation has found its way to him, rather than his best friend Zahara who is a powerful mage who can easily access magic called draoad. Ekarath has to learn the three basic types of power from Destruction to Illusion to Restoration while Zahara has to fake being the heir for fear that Ekarath will be easy pickings for the usurper if he is caught before he is ready.

Mahzun calls himself the Savior of Mankind, but along with the name Usurper, he's also called Wild Man, Primal Key, and Destroyer of the World. Mahzun claims he is fighting a war to liberate humanity from the tyranny of the Heirs. There was once 7 heirs decreed by the Creator, but with the fall of Dimitri by his sword, Mahzun feels as though his 10 year war has finally come to an end even at the cost of his own body which has aged decades. Until the Power of Creation decides to find a new host. Mahzun doesn't see himself as the villain. He sees himself as a hero who is getting revenge on those who has suppressed people for generations.

Here are my regrets: The reader is literally dropped in the middle of a very complex world that is at war and expected to understand how everything works and who everyone is without the benefit of at least a bit of explanation. Mahzun is the character mostly formed by the author while Zahara and Ekarath are left to dance around from scene to scene until an encounter with the Usurper is all but doomed to fail. The ending was probably the best part of this book but it also leaves many, many unanswered questions pertaining to a certain character who seems to hang around for no apparent reasoning except to torture one of the characters.