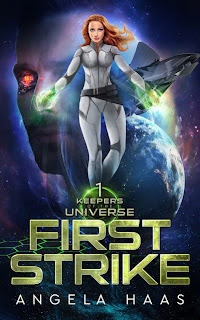 Stella Jayne Walsh, New York City's top-rated trauma surgeon, holds an astounding record. She's never lost a patient—until the day she does. In that moment, her world shatters, and she's swept into an adventure that launches her from Manhattan into alien worlds in the far reaches of space.

John "Ryder" Alexander is a handsome rogue and one of the most decorated soldiers in the galaxy—until he turns unwilling mercenary, blackmailed into committing heinous crimes.

Stella is targeted by a woman hell-bent on creating a universe where other women don't exist and all men bend to her will. Stella and her crew of misfits must stop this villain before she helps awaken a slumbering force of evil.

Can Stella let go of the life she knew and learn to trust her unlikely new team to save everyone—and everything—she loves?

First Strike, by author Angela Haas, is the first installment in the authors Keepers of the Universe series. As the story opens, readers are introduced to Dr. Stella Jayne Walsh, a trauma surgeon who works for New York City's Mercy General. She's not had a death in 5 years, but that is all about to change. On that same day, Walsh is drugged, kidnapped, and spirited away, along with former reality contestant Elliot Driver, to another universe where they are supposed to be the newest residents of a fledgling new planet led by Captain Stallworth.

John "Ryder" Alexander and his Kaygun team, which included both his sister, and brother, found themselves being betrayed by their alleged backup. When he woke, he found out that he was put back together by a evil scientist named Kandice Marie who blackmailed him into doing things that he would not have though of before his life changed in order to save his sister. One of those jobs is finding and bringing back so called Keepers of Health so that she can assist her new allies who were defeated long ago by the Keepers of the Universe.

Stella, who finds out that she is a Healer with remarkable abilities that need to be discovered, soon finds herself targeted by Kandice who is hell-bent on creating a universe where other women don't exist and all men bend to her will. Stella and her crew of misfits, including Elliot, and Sentinel's who protect the innocent, must stop this villain before she helps awaken a slumbering force of evil. That includes discovering who she really is, and running into two women who were best friends with her mother and are now living in retirement not caring what has happened in the universe since they disappeared into obscurity.

Although this book could be read as a standalone, I think that this is actually going to need a sequel to find out what happens next now that Stella has found her groove, and Alexander has his own goals of reclaiming his status as one of the best soldiers in the universe. There are plenty of laughs, as well as action to keep even the most unsatisfied reader happy.