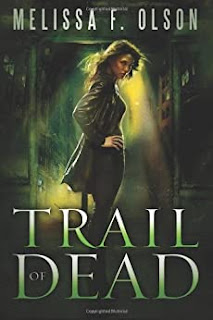 As a null, Scarlett Bernard possesses a rare ability to counteract the supernatural by instantly neutralizing spells and magical forces. For years she has used her gift to scrub crime scenes of any magical traces, helping the powerful paranormal communities of Los Angeles stay hidden. But after LAPD detective Jesse Cruz discovered Scarlett’s secret, he made a bargain with her: solve a particularly grisly murder case, and he would stay silent about the city’s unearthly underworld.

Now two dead witches are found a few days before Christmas, and Scarlett is once again strong-armed into assisting the investigation. She soon finds a connection between the murders and her own former mentor, Olivia, a null who mysteriously turned into a vampire and who harbors her own sinister agenda. Now Scarlett must revisit her painful past to find Olivia—unless the blood-drenched present claims her life first.

Trail of Dead is the second installment in author Melissa F. Olson's Scarlett Bernard series. This is also the second book in the authors Old World series which will eventually include Lex Luther. As the story opens, Scarlett has been away in NYC getting a bit of a lesson on what it means to be a null in the Old World. Any supernatural be it werewolf, vampire, or witch, automatically loses their magic when they are around Scarlett and turns human again. But Scarlett's biggest challenge may be the one person who knows her the best; Olivia.

When two witches belonging to Kirsten's coven are found dead, Scarlett teams up with Detective Jesse Cruz to find the culprit. Then it is discovered that two humans may have also been murdered as a possible lure for Scarlett. She soon finds a connection between the grisly murders and her former estranged mentor, Olivia, a null who has mysteriously turned into a vampire who harbors a sinister agenda. With the threat of Olivia targeting her friends, and her estranged brother, Scarlett decides to go on the offensive only to find herself between a rock and a hard place.

If you haven't read Dead Spot yet, I kindly suggest that you do. Scarlett was trained by Olivia to clean up supernatural scenes so that local cops don't discover that there are more than just humans living in the area. While Jesse learned a valuable lesson about the Old World and dealing with people like Dashiell, Will Carlin, and Kirsten Harms-Dickerson, he has no idea what Scarlett has been through since Olivia did some mind numbing things to pretty much brainwash her into being the perfect student. In fact, he's pretty angry to know that Scarlett is caught in something big.

Told by Scarlett and Jesse’s point of view, the book offers insight into both their thoughts and motives. We learn more about Scarlett’s past including what really happened to Olivia as well as Scarlett's own parents, and why she seems to now be targeting those she once helped. One of the more twisted aspects of this story is that yes, the supernatural are dangerous, and can kill without a thought, and yes, Scarlett owes a bit of revenge on the woman that took everything away from her, but it is the relationship Scarlett has with Eli as well as Jesse.

For me, I have an understanding already of what is to come in future novels, but don't let me stop you from reading the rest of this first trilogy as well as the rest of the Old World series including Lex Luther's books. The heroine is imperfect and occasionally has doubts about what she's doing. She's easily manipulated by Dashiell because he could kill her in a New York minute. Except for being a null of some great ability, she isn't one who is going to kick your ass if you cross her. I honestly blame Olivia for her inter-personal issues that she has in choosing who to let her heart out to.