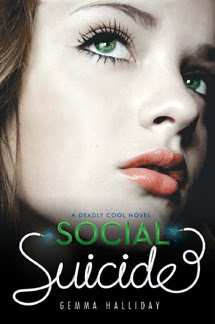 My favorite Veronica Mars wannabe Hartley Featherstone is back, and this time she is working for the Herbert Hoover High online newspaper. Her first real story involves two girls who were caught cheating on a test. Hartley is given the job by Chase Erikson, the papers editor and Hartley's crush, to find out where the kids got the test answers from.

Hartley is once again thrown into the middle of a murder investigation when she finds one of the girls dead in her own pool! Hartley was there to get the scoop at where the answers to the test came from! Hartley is getting a bad reputation by the cops (Detective Raley) in that she seems to be around whenever someone is killed.

Hartley and crew calls the death of Sydney Sanders Twittercide: the killing of one human being by another while the victim is in the act of tweeting.

Hartley is a determined and fun character who I enjoy reading about. She stumbles and bumbles and weaves her way through high school silliness in order to get to the bottom of what truly happened to Sydney. She gets her signals mixed up with Chase more often than not, because, hey, Chase is a boy after-all. In the end, we can hope that the two of them will realize how utterly silly they are and that they are supposed to be together.

I would say that you don't have to read Deadly Cool in order get more in-depth character development out of Hartley, Sam and Chase. But, I would recommend reading it regardless just to see how far Hartley has grown over the course of this series. Both stories are hilarious. They both mix mystery with suspense and a whose who of capable killers. Both involve Mother/Daughter tom foolery that will have you cracking up!

Email ThisBlogThis!Share to TwitterShare to FacebookShare to Pinterest
Labels: YA Fantasy