Reviewed: A Trace of Moonlight by Allison Pang 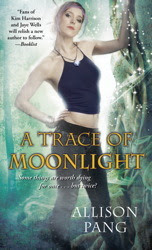 Apparently, “A Trace of Moonlight” is the third and final book in the Abby Sinclair series. If you haven’t read the first two books in the series, I would highly recommend that you do so before jumping into this one. Trust me folks, if you do just jump into this book without reading the first two, you will be totally and completely lost without any hope of someone throwing you a lifeline.

Abby has seen her fair share of challenges throughout the series and has somehow managed to come out alive and in one piece even with making some of the most idiotic choices ever. With the cliffhanger ending to “A Sliver of Shadow,” Abby has lost a part of her; her own memories. This came from drinking Lethe water from the River Styx and agreeing to become a Tithe or sacrifice in a deal with the daemon Nobu. Abby’s decision to drink the water was based solely on the fact that she was trying to save the Seelie Queen.

A Trace of Moonlight really begins with Abby trying to claw her way back to reality and not trusting what others like Prince Taliver (whom she is supposedly betrothed to) and Princess Moira (her sister), or even Phineas (Unicorn) have told her. It also reveals that Ion has disappeared and nobody has really seen him in a long time. When he does reappear, he desperately tries to help Abby out in the land of the Dreamer.

As with the previous two books, Abby has to figure out a way out to save not only herself, but Faery as well since Maurice has gone on a rampage with the Key to the Crossroads and is turning things inside out and causing all sorts of problems.

This series centers on Abby’s relationships with Brystion (Incubus) and Talivar (elven prince) and the fact that she is a Touchstone and Keystone who is able to keep the otherkind connected to Faerie. You really can’t go wrong with liking either character and hoping that she ends up with one or the other. In the end, we are left with a real interesting dilemma that I will not spoil for you and the hope that Allison Pang won’t totally abandon these characters now that the book is out in print.

One of the more interesting aspects of this series is the world building and the additional sub characters that make this series worth reading. There is the off cuff banter between Phin and Abby which will make you laugh your socks off. Phin isn’t just comic relief, however, he genuinely seems to care about Abby and even goes as far as saving her life while she is clouded with her memory loss and lies dying from an attack by Maurice.

This series kind of goes against everything I hate in 3 way love triangles. Pang, though, sucks you in from the onset with the fact that either Ion, or Talivar would make Abby happy. In the end, they both do, and I won’t even bother telling you in which direction I would have chosen.