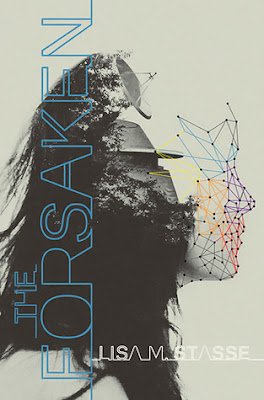 I'm normally a sucker for all things Dystopian. Unfortunately, not all novels are written equally amazing. In fact, sometimes they come up lame and it makes me shake my head in sadness at what could have been. This book falls somewhere in the middle of that for me. While the theory behind the meltdown of the global economy has done before; the unusual gathering between Mexico, Canada and the US as the UNA (United Northern Alliance) as one super-nation has not. Normally it's a grouping of individual communities/states banding together in order to survive being run over by other entities.

The Forsaken is told in the first POV by Alenna Shawcross a 16 year old who ended up being a ward of the state after her dissident parents were dragged away from her when she was 10 years old. After Alenna takes and somehow fails a government mandated personality profile test (GPPT) set to cull out the murderers, rapists, thieves, and psychopaths in society; Alenna ends up on Prison Island Alpha (aka the Wheel) where she is just another sad story that is forced to learn how to survive and fight against all odds including attacks by different tribes and flying Feelers who take people away and are never seen or heard from again. Later, the truth behind the GPPT is exposed for what it truly is; a total shame by a government gone overboard and craving ultimate power over it's citizens.

The Forsaken IS an interesting story as well as a fast paced one. Please don't take my somewhat lackadaisical beginning of this review to think I hated this book. I didn't. In fact, I do plan on reading the sequel once it’s released. There were parts that were interesting, while parts that made me cringe. There was of course the Insta-Love affair that has been coming out of the wood work this past year. The author somewhat made up for the attraction with a plausible answer to the question as to how two people like Alenna and Liam could end up together in the first place.

Another one of my pet peeves was the creation of the UNA. Again, supposition states that the UNA was created because there was a global economic meltdown (as stated above). What doesn't make sense is that this story takes place in 2032, which in fantasy land is only 19 years away. So, in 19 years, 3 whole economies in North American crumble and the governments do away with their autonomies in order to create the UNA. Doesn't seem plausible or make any logical sense. Of course, I may be over thinking the entire story.

Naturally, my thoughts and review don’t cover most of the stuff that happens over the course of the book including decent secondary characters like Gadya and David. No, in order for you to find out more, you will either have to purchase the book, or borrow it from the library like I did. Being as this is the first book in the series, there are a bunch of questions left to be answered. There’s the fate of more than 5 characters left hanging in the balance as the book switches its focus entirely to Alenna and Liam’s fate. I’m actually eager to see where the author takes the series from here.

Posted by Shelley Romano at 6:39 PM