Review - In The House of The Wicked by Thomas Sniegoski 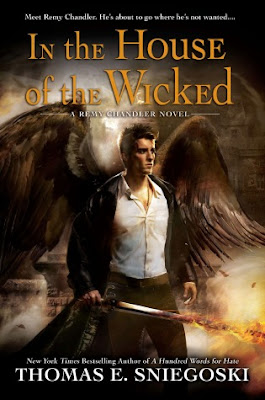 “In the House of the Wicked” is the fifth installment in the Remy Chandler series. I am very surprised and shocked that more people haven't read this series. What's not to like? You have a charismatic and strong male lead character that just happens to be a private investigator and the Seraphim named Remiel.

Remy gave up everything during the battle between Heaven and Lucifer in order to help humanity and later fell in love only to lose her to old age. He continues to fight the good fight against evil and those who want to bring about the end of the world by any means necessary like the Four Horseman of the Apocalypse, the Demented Angel Malachi, and Lucifer himself in Tartarus. He's not perfect in any way shape or form and is constantly trying to keep his two sides from melding together and losing himself once and for-all.

He has an awesome dog named Marlowe who I adore and want and who he can talk to and understand. He has some nifty friends in Francis (former Guardian Angel and assassin who disappeared and now is back), and Steven Mulvehill a Boston PD Homicide Detective who fell down the rabbit hole in a previous installment and now understands that humans aren't alone in this world. He may or may not be falling for his new girlfriend Linda who is unaware of who, or what Remy really does on a daily basis.

In this book, Remy is forced to save Marlowe's babysitter Ashley Berg who he is very fond of and thinks the world of. There is a nice back story to when Ashley and Remy first met, and how over the years, she became a part of Remy’s extended family. On top of all that, he ends up in the middle of a battle between two destructive sorcerer’s who feed off human energy and want to use Remy in order to gain leverage and revenge.

This series has quickly grown on me for the depth and scope of the world building that Sniegoski has created. By the end of this novel, things have quickly headed for a showdown of epic proportions between those who want to save humanity and those who want to see it end. It will be surprising to see which characters survive until the end of this series since they are constantly put into jeopardy.

An interesting new character named Squire makes his debut in this novel. As a hobgoblin living in the Shadowlands where a lot of the action takes place, Squire quickly became a character I wanted to know more about. I wanted to know where he came from, and how long he had been in the Shadowlands. I wanted to know how he thought of himself as a good guy like Remy. I liked the fact that he tried his best to help Remy and Ashley after they were brought into the Shadows. I like the fact that there is the possibility that he will remain a mainstay in this series. ::Crosses fingers:: Yet, I also want to know what the purpose of bring Squire into this series now was.

I liked seeing the return of Francis to the storyline after disappearing into hell and not knowing what his fate was. As a former Guardian to the gates of Tartarus, Remy actually thought the worse had happened to him and was pleasantly surprised when he returned. What we do know is that Francis is working for someone now, and no, I am not going to say who it is since it spoils a part of the story. What that means for his relationship with Remy is yet to be written but we can thank the publisher that there is at least one more book in this series.

I liked that Steven Mulvehill makes an appearance and hasn't been written out of the series after what happened to him. There is a lot of work that needs to be done in order for Remy and Steven to work things out after Steven nearly died and was saved by Remy. It also appears by the ending, that Steven has a lot more story to tell with the approach of someone from the Vatican.

In the end, however, Sniegoski threw me for a loop with a flipping cliffhanger. Here I thought the story ended, and ::BOOM::: he leaves us with a glimpse of an undetermined character who may have been the catalyst that drove the sorcerer’s to their actions. Of course, we have no idea behind this characters identity or why he wants to start a war to end all wars. Guess I’ll just have to wait until "Walking In the Midst of Fire" comes out August of this year to find out!