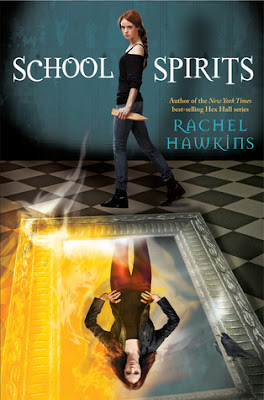 School Spirits is the first book in a spin-off series from the writer of the Hex Hall trilogy Rachel Hawkins. The story features 15-year old Isobel (Izzy) Brannick and her mother Aislinn the last known surviving members of the Brannick clan who travel to a town in Mississippi to investigate the reporting of ghost activity at a local high school.

As a little refresher, the Brannick women are known for their fierce ability in hunting vampires, werewolves, witches, and Fae who step out of line. They now work for the Prodigium Council where Sophie Mercer, Izzy's cousin, is in line to become it's new leader. Izzy's sister Finley has been missing for nearly a year now after disappearing on what was thought to be a routine mission to New Orleans, and Aislinn believes that Torin, the warlock trapped in a mirror, knows more than he is saying. Since then, Izzy has been torn emotionally believing she's to blame for Finley's absence.

When Izzy arrives in Ideal, Mississippi after messing up a mission against a glitter wearing vampire, she's given what's supposed to be and in an out job; find the ghost and dispatch it quickly. She soon realizes that she has no clue how to deal with other students or have friends since she has been home-schooled for her entire life and decides to purchase a series of TV shows depicting the teenaged lifestyle. Izzy meets the rag team from PMS (Paranormal Management Society) Romy, Anderson, and Dexter a band of so called ghost hunters who become close while trying to stop the schools ghost from taking another life.

Readers should NOT compare the characters of Sophie and Izzy even though they are cousins. Izzy has been trained from a young age to face all sorts of demons and therefore doesn't have the skill set necessary to make it among a group of teenagers as shown when on her first day of PE when she dislocates a boys shoulder playing Dodgeball.

As for the secondary characters, Romy Hayden is probably the most fun, while Dexter O'Neill becomes the so called love interest. Thankfully, Hawkins doesn't go the way of many other authors by writing Izzy into a 3-way love triangle. Dex is an interesting character as we later find out and it appears he will become a regular character in this series after agreeing that Izzy and he are just "friends".

It was actually fun watching Izzy struggle with her true identity while trying to fit in among the PMS group. Yeah, I know, it's an awful name for a group but it totally works for this story. There are a few more questions I have especially concerning Torin's role in this series, and the fate of Finley Brannick but I will gladly wait and see what happens next.

School Spirits is a fun and fast read that readers of the Hex Hall trilogy will hopefully enjoy. There was more than a few times where I actually laughed while reading about Izzy and her new group of friends. It's also sad in a way knowing that Izzy moves from town to town hunting supernatural beings with her mother alongside and really doesn't have any true friends. Maybe that will change as the series progresses. Definitely looking forward for the sequel to be written and released.

FTC Advisory: Disney-Hyperion provided me with a copy of School Spirits. No goody bags, sponsorship's, “material connections,” or bribes were exchanged for my review