*Review* Requiem For The Dead (Dreg City #5) by Kelly Meding 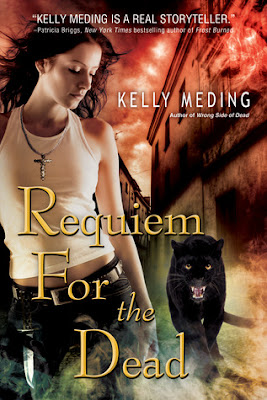 Requiem for The Dead is the fifth installment in the Dreg City series and will be self published by author Kelly Meding on September 16, 2013. If you've read the series already, you won't have any problems transitioning from what happened in Wrong Side of Dead to this novel. If you haven't, I would highly recommend that you start with Three Days to Dead and read forward. As a supporter of this series, I definitely would like to see a sixth book and maybe even a seventh novel to ensure that Evy's story gets wrapped up in way benefiting her trials and tribulations.

Dreg City is an interesting place to be. There are shape-shifters, vampires, goblins, gremlins, halfies, and various other fey living within the confines of the city. They live alongside humans who may or may not be aware of their existence. There are some humans who do know about the existence of the paranormal, and they are called Hunters. This includes Evy Stone, Adrian Baylor, Wyatt Truman, Milo Grant, Rufus St. James, and Gina Kismet. The Dreg City stories are told in the first person POV by Evangeline (Evy) Stone. Stone, if you haven't heard by now, is like the ever ready battery bunny of heroines. She takes a licking and keeps on kicking ass much to the chagrin of those who want her to die a permanent death.

Once again, Evy has a lot on her plate. Her boyfriend and partner, Wyatt Truman, is still trying to deal with being infected with the Lupa virus 5 weeks ago that has made their relationship tenuous at best. Over the past 2 weeks, there has been an uprising in Goblin attacks on humans. They've gone as far as to leave Evy messages letting her know that the attacks are in response to her actions. Phineas is still missing after he went in search of others of his kind. She's also trying hard to find a cure for Walter Thackery's shadow virus that has put her vampire colleagues into a state of suspended animation and therefore unable to help the growing swell of attacks on humans, and the division within the Watchtower, all thanks to the manipulations of the Fey Queen Amalie.

I can say this about Evy as a character, she has definitely grown up over the last two novels. She doesn't rush into things without thinking about the consequences first. She thinks about what may happen, and then acts with her partners in tow. She still makes some snap decisions, but I think if you were in the same situation, you would have a hard time resisting doing the same thing. She also realizes that she has changed since becoming a Hunter for the now defunct Triad. She understands that holding onto grudges and prejudices against her Watchtower colleagues is self destructive at best. I think that she's even come to value and trust her new colleagues even though they are definitely put to the ultimate test in Requiem.

I have to thank author Kelly Meding for offering up a copy of Requiem For The Dead in lieu on an honest review. Knowing how much I love this series, it doesn't take much for me to jump feet first right into the story and grab each installment as they are released. I definitely think that fans of the Dreg City will eat up Requiem for breakfast. It is fairly fast paced, there are dangers and villains around every corner, and this is also an emotional book with personal revelations, and teammates who fall by the wayside, and perhaps, just perhaps, and end in sight to the bitch queen Amalie who surely needs to be put down soon.