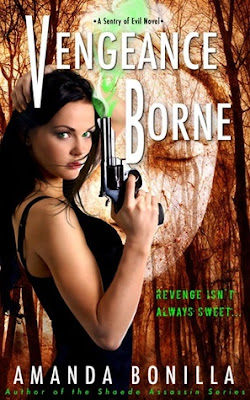 Today, I am discussing the soon to be released novel Vengeance Borne by author Amanda Bonilla (September 3, 2013). The same author who brought us the Shade Assassin series which features Darian. I have begged Amanda for more Darian in a case of pathetic groveling. There is no shame in saying that I have a fondness for Amanda's stories and hope that other readers will jump on the Shaede Assassin bandwagon soon! In the meantime, let's continue with Vengeance Borne discussion.

Vengeance Borne is the first novel in the Sentry of Evil series that introduces readers to Jacquelyn Byrne. Simply put, "Jax" is a supernatural demon slayer known as a Waerd. She also has a Bearer partner she is teamed up with as a force against supernatural baddies. She's supposedly been "chosen" and is "fated" to serve until she is no longer able to. Call it a life sentence as there is no quitting just because you hate your job.

Appointed as a protector by the mysterious Sentry organization that swooped in and took her away from her family as a child, then trained her to become a warrior (see killer), Jax is responsible for the area surrounding McCall, Idaho and vicinity. Apparently, there is more to Jax than meets the eye and one can only hope that Bonilla, (in the form of Trish), reveals her past, and her reason for being a Waerd in the books to come.

Although much of the story IS focused and centered around Jax, (especially by the villain who brings Furies into McCall in order to get his vengeance on others), she isn't the main course. There is also Romany Micah Marinescu who is a Bearer, and who stumbled into McCall by chance after running away from his visions. Finn Connor has been Jax's partner for the past 5 years, and is also a Bearer and her ex-boyfriend who refuses to let go. LET GO DAMN YOU!!! Trish Whitney is also a Bearer and is considered Jax, Finn, and Micah's direct supervisor. Trish has a lot of knowledge that she is keeping away from Jax and like I said, I hope she unveils it soon. I think there is more to Micah than meets the eye as well and his interaction with a certain special guest character should be interesting.

You are asking yourself, yes, but what exactly is a Bearer and why should I care? Excellent question! A Bearer has emphatic abilities. He or She can keep a Waerd grounded and can sense people’s emotions. They can also absorb both their physical and emotional pain and take it away if and when they are asked. In Finn’s case, I wanted to punch him in the mouth when he goes a bit too far with Jax. No spoiler here!

Can I just say that I found it fascinating that the story is set in Idaho a place I've never been to but would like to see before I kick the bucket? With the author herself living in Idaho, it makes for a much more interesting story and of course, a realistic setting. Vengeance Borne clearly falls into the Urban Fantasy genre even though there is a hint of romance that isn't pushed upon readers. Yes, UF readers, you can have romance in your stories as well!

I think that Vengeance Borne has a lot going for it especially since it is the first novel in a series. The pacing is decent enough that it doesn’t wear you down, or bog you down with unnecessary distractions. Jax's background before she came to McCall is explained just enough so that you get the feeling that she's not had the easiest road to travel and I definitely would like to learn more.

The villain is a person who you may, or may not feel an emotional attachment to. You may even understand his reasoning behind calling the Furies to do his bidding for him. For me, this character represents lost causes everywhere. You know the person who never gets the girl or guy they want, and are treated like they are harmless, or wouldn't harm a fly?

Vengeance Borne isn’t necessarily a dark or gritty novel. We don’t see a whole lot of bloodshed by Jax but it’s on the precipice and maybe a bit understated. Jax is a lot like Gin Blanco in that she has a dual identity. By day, she works as a barista, and by night, she fights the good fight against beings that would hunt and harm humans.