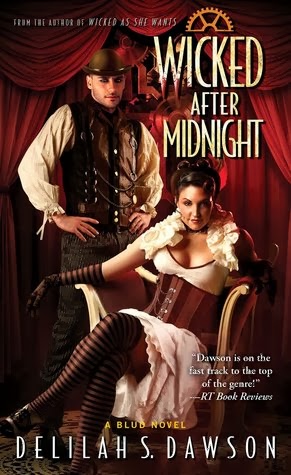 The author has announced that Wicked After Midnight will be the last Blud series story. The series ends with a character that Dawson touched briefly on in The Damsel and the Daggerman in Bludman/Contortionist Demi Ward. After partying too hard, Demi ended up in a coma, and was later transported to Sang where she was dying until Criminy Stain Bludded her, and saved her life. Demi has now been stuck in Sangland for the past SIX years with apparently no hope of ever going back to Earth unlike Tish who can come and go.

If you are a fan of the Blud series, you know that Sang is an upside down, twisted, & dark world filled with Blud animals of all kinds including unicorns, Bludman, Daimons, and Pinky's. It is a world where Criminy's Carnival is probably safest place for Bludman to be since they are protected and safe from Pinky's who would rather drain them, then allow them any rights. In this world, women are once again put into a corner and not given any rights or privileges unless they have a man standing behind them to champion their causes. It is even worse when it comes to being a female Bludman.

Demi is a character that will be talked about for awhile in both good and bad terms I think. As a former college coed who drank too much, and ended up in a coma without experiencing what life's challenges are all about, Demi is looking for an adventure all her own even if it means cutting off her nose to spite her face. She hates to be told what to do, when to do it, and how to do it. She's wants to party, have some independence of her own, and above all, meet and fall in love with a man who understands her, and doesn't bore the living snot out of her like her past encounters have. In some circles, Demi would be considered a driven woman, while others would call her a total unfeeling bitch.

When Cherie is taken by slavers on the way to Paris, Demi meets highwayman Vale Hildebrand who has more than his own fair share of challenges and expectations that he is supposed to live up to but hasn't. Demi is so determined to go out on her own and become famous, that she schemes, throws caution to the wind, and ends up up to her eyes in trouble, deception, betrayal, and a cabaret club where not everything is as it appears. Demi ends up being involved with a slew of less than honorable individuals whose own desire of fame and fortune puts girls in difficult positions where prostitution is their only way out of destitution or worse.

Although this IS Demi's story, I really felt loathing for her at times because she seems to put her own desires and agenda ahead of looking for her best friend Cherie who experiences pain and suffering of unimaginable consequences. This is the same Cherie who took Demi in Six years ago and became not only her best friend and partner, but someone who would keep an eye out for her, and taught her what it meant to be a blood drinker. It was after-all, Demi's desire to be independent from Criminy, that swayed Cherie to go with her to Franchia. Demi's push to become a mega superstar will get people's attention to the point where you have to ask yourself what would YOU do if you best friend was taken, and the only hope you had for her rescue, was to a become so popular that people would do anything to have you, and therefore, maybe lead you to finding her before it's too late.

As with previous installments, including novellas, Wicked After Midnight does have its smexy moments which readers have come to enjoy since they are hot and steamy and gets your hearts beating and blood flowing. Wicked After Midnight also leaves an interesting question from Demi's prospective: Will Tish ever become blooded, or will she end up back on Earth? That has been a question that has been plaguing my thoughts ever since Wicked as They Come was released with Criminy and Tish's story and subsequent novella's where Criminy and Tish appeared married, but her blooded situation has never been wrapped up. Fans of the series will also get farewell appearances by Murdoch and Imogen, as well as Jacinda and Marco who were part of Demi's life.

I would & do recommend this series to anyone who asks me. Dawson's world building and characters are entertaining and far from being the same old same we've come to expect from Steampunk romances. I would definitely say that you SHOULD also try the novella's even though they are not necessary to enjoyment of the series at whole. I think that Wicked After Midnight will get some references to MOULIN ROUGE when reading and reviewing the book, and that doesn't necessarily seem like a bad thing to me.