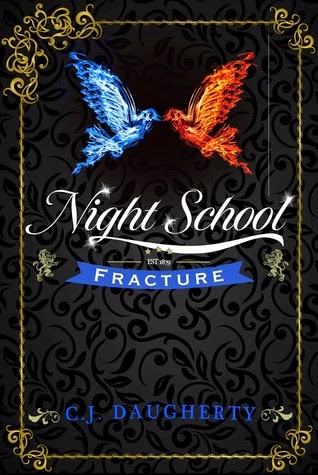 **I received this book for free from NetGalley/Bookouture in exchange for an honest review. This does not affect my opinion of the book or the content of my review.**

Fracture really is a good name for not only the book itself, but what happens in inside. Allie Sheridan is still attending Cimmeria Academy, but she's a walking, talking, shell of her former self as we begin the story. She's angry at those who are supposed to protect her and the students (Isabelle & Raj). She tries to keep her distance from her supposed friends in Rachel, Carter, Sylvain, Nicole, and Zoe because she can't figure out who to trust after losing a close friend at the end of Legacy. She thought she could trust people, but Nathaniel and his thugs continue to try to find ways to capture Allie by any means necessary, and the spy, or spies have yet to be revealed.

I think Fracture is at the crossroads of the entire Night School series. It is definitely a bridge to Resistance (Book # 4) and the series finale. You know by now who the major villains are, including Allie's brother Christopher, and what they want from Lucinda, Isabelle, and especially Allie. You are hopeful that Allie has managed to surround herself with the right group of people she gravitates back around to in order to keep her safe from Nathaniel and his minions. You hope that her intensive training she's experienced at Night School will finally pay of and she can hold her own without once again falling into HIS crutches.

Fracture is all about hints, revelations, surprising, yet not so subtle moves by Nathaniel, and jumps here and there that are so subtle, you don't know whether or not you are truly seeing what you are reading, or they truly matter to the overall fate of Allie and her friends. I know that there was a MAJOR piece of the puzzle revealed in Legacy which was totally ignored by Allie since she was a little BUSY at the time. I know things have become a little bit clearer about the organization, Lucinda's legacy, Cimmeria, and Night Schools part in all of it, as well as learning more about the man behind the mask: Nathaniel.

As for the so called romance in Fracture, I don't think things could become much more muddled than they already were. I've gone from hating Sylvain in Night School, to liking him, to wondering if I can truly trust him. There's obviously more to him than meets the eye test. I've gone from disliking Carter for his abruptness and the fact that he's obviously in-tuned with someone else, but can't help but wonder if Daugherty has more surprises up her sleeves for us. I also continue to wonder if one of these boys is truly on Allie's side, or are they are just waiting to stab her in the back. I know, I am a vicious reader with morals of a prude.

The one thing that remains constant for me is Allie's ability to survive against all odds while still finding a way to feel shocked at what is revealed to her. There is an interesting climax to Fracture that changes everything for this series. Thankfully, Bookouture has graciously sent me a copy of Resistance so that I don't have to wait around months, or even a year to read what happens next. I am so not ready for Resistance. I have a nagging feeling that Daugherty isn't done breaking my heart yet.