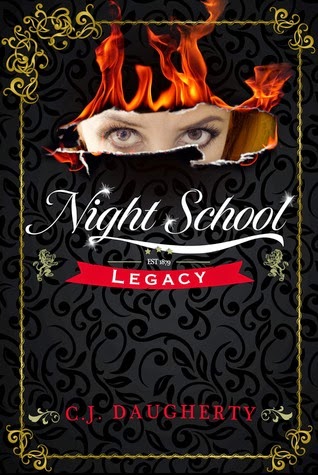 **I received this book for free from NetGalley in exchange for an honest review. This does not affect my opinion of the book or the content of my review.**

Sixteen-year old Allie Sheridan has had an interesting time since arriving at Cimmeria Academy at the behest of her parents after she continued to get into deep trouble after her brother Christopher left her behind. In the two months since she started at Cimmeria, she helped save the school from being burned to the ground, she discovered a dead girls body, learned that her family hasn't exactly told her the entire truth about her families connections, came face to face with her disgruntled brother who disappeared Two years ago and ended up in Nathaniel's army, and now finds herself the target of capture by Nathaniel's thugs when she's away from school as well as at it.

On the personal front, she's in a relationship with Carter West who I truly found hard to swallow this time around because he refuses to allow Allie any leeway, or freedom from his intrusive obsession. Funny, as much as I loathe three-way love triangles, I actually found myself hoping that Sylvain Cassel would somehow find a way to make amends for his actions in Night School. We shall see if this pans out, or who she ends up with when all is said and done.

But, the most surprising aspect of Legacy is the fact that Allie is given the opportunity to join the mysterious Night School, which has decided that they will be focusing on training, and self defense in order to keep the students safe. At this point, I would like to point out that I found myself grinning at thirteen-year old Zoe who is a brilliantly written character and can kick some serious ass. When Zoe and Allie are teamed up, it is definitely an interesting match.

I also found myself wondering just how much longer Allie will remain friends with her best friend Rachel Patel, whose father is part of the Night School, but she refuses to join the group. There are so many secrets, and lies, and things that Allie is forced into discovering, including the revelation about her grandmother Lucinda Meldrum, and why Nathaniel is such a rotten to the core villain.

While Legacy doesn’t necessarily suffer from a cliffhanger ending, it does leave a hole in the readers heart when a secondary character falls. I don't want to spoil anything, so, I shall say this, expect a whole new Allie when Fracture releases. I have a pretty good idea of who the traitor is, but I'll be patient in hoping that Daugherty doesn't leave me hanging when revealing the truth I also expect that Daughterty will continue to grow Allie into an even better character who takes charge and doesn't allow anyone to keep her from the answers she so justly deserves.

Thank YOU to the US publisher of Night School: Legacy for their brilliance in sharing with me the next 3 books in the series. I can honestly say that I was blown away by your kindness, and will do my best to read all three and post my reviews where appropriate.