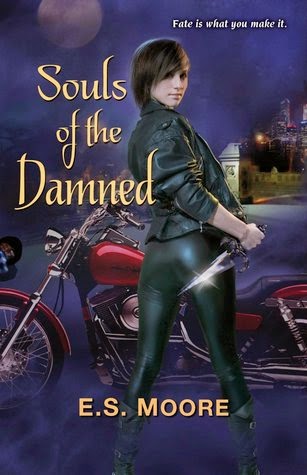 **I received this book from NetGalley in exchange for an honest review. This does not affect my opinion of the book or the content of my review.**

Souls of the Damned picks up right where Blood From a Silver Cross ended. Kat Redding has her hands full with a surprise visitor (Sienna, the girl from Delai), a pending confrontation with Countess Baset who wants Kat to submit to her, and Adrian Davis who wants her to be his mate. There are her feelings for former den-master Jonathan Alucard hanging in the balance, as well as the demon Beligral who continues to taunt and tempt her with juicy morsels including the return of her humanity.

If you have read this series, you know that it would be something of a shock were Kat not in deep kimchee 24/7/365.

Reader Beware! If you have NOT read the previous installments in the Kat Redding series, I would discourage you from jumping ahead in the series. Readers need know about the town of Delai, and why Sienna's sudden appearance means so much to Kat, and throws everything else she has to deal with out the window in one fell swoop. You need to know about Kat's nemesis Levi and why finally putting him down for good, will allow her a bit of freedom.

Unfortunately, even though we do get one resolution in Levi and Kat's conflict, we are still left with many unresolved questions in regards to Sienna. Why is she so important? Why was her blood so useful to Levi? Why was Beligral so homed in on Sienna to the point of asking Kat if she was really serious about not wanting to regain her humanity she's longed for since she was turned into a vampire? Why does Beligral see things about Kat that we haven't been told yet?

I often grumble when authors build up conflicts and then leaves readers hanging off the edge of a cliff. Once again, Moore has left me hanging. After FIVE novels, there are a whole lot of unresolved issues for Kat to deal with. What makes matters even worse, is that one of the more reliable characters who shall remain nameless, finds himself with challenges that are not explained. How will this persons problems affect Kat's ability to gather important information? I guess we shall see.

Although, I really enjoy this series and will continue until the series is wrapped up, I would love to see Moore resolve the issues quickly with Adrian, Baset, and Beligral, and kill off some characters so that Kat can focus on one problem at at time. I do find the growth in Kat pretty interesting. Called Lady Death because of her bloody trails she leaves behind, this time around she has to use her smarts, and logic in order to defeat a much stronger and powerful nemesis. I'm also kind of surprised, but not really in that Moore has finally decided to allow Kat to have a bit of romance in the middle of the rest of the world going to hell in a hand basket.