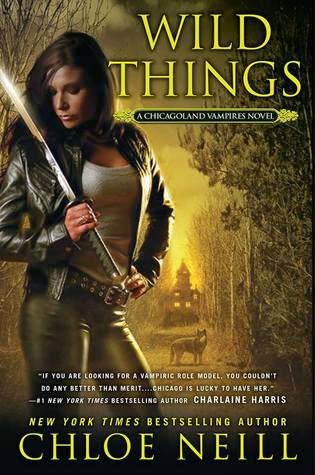 Since Merit was turned into a vampire, and the protector of Chicago’s Cadogan House, it’s been a wild ride. She and Master vampire Ethan Sullivan have helped make Cadogan’s vampires the strongest in North America, and forged ties with paranormal folk of all breeds and creeds, living or dead…or both.But now those alliances are about to be tested. A strange and twisted magic has ripped through the North American Central Pack, and Merit’s closest friends are caught in the crosshairs. Gabriel Keene, the Pack Apex, looks to Merit and Ethan for help. But who—or what—could possibly be powerful enough to out-magic a shifter?Merit is about to go toe to toe, and cold steel to cold heart, to find out.

Chloe Neill's Wild Things (Chicagoland Vampires #9) picks up with Merit, Ethan and the Cadogan vampires dealing with the fall-out from Biting Bad. Mayor Kowalski has a major ax to grind with the vampires of Chicago, especially Ethan, to the point of labeling the vampires domestic terrorists in order to bring them to their knees.

If that weren't enough, the General Presidium wants their pound of flesh as well, leaving Ethan no real choice but to flee the city with Merit alongside until things get smoothed over. This means finding refuge among the North American Pack lead by Gabriel Keene whose prophecy concerning Merit's future and a green eyed baby, is one of the mysteries that has remained unresolved.

Since this IS Merit and Ethan, not everything goes smoothly. As the celebration of Lupercalia kicks in, all hell breaks loose, and creatures that haven't been seen before, make their presence known in a major way. Merit, along with Jeff, Mallory, and Catcher, take the lead in finding out who is responsible while Ethan faces his own challenge, and a decision about his future.

Ever since Merit was turned into a vampire 10 months ago, she has had to go through several changes. She's become more comfortable as a vampire, and takes her job as Sentinel seriously as well as the threats to the vampires and their allies. What is also pleasant to read about, is the fact that Merit isn't embarrassed any longer by being in a relationship with Ethan. Their relationship has turned the corner to the point where they almost feel like a happily married couple.

For me, Wild Things wasn't necessarily the best novel of the series, but I'm not ready to say it was a disappointment either. The story was more of a wrap-up of the previous story arc, and hopefully, we are moving towards an even more entertaining one with lots of action, mystery, suspense, dangers, and romance. I still enjoy Merit, Ethan, and the rest of the cast of characters. Merit still tends to get beaten down like a drunken homeless person more times than not, but in the end, she somehow manages to live to see another day.

Is anyone besides me sick of Mayor Kowalski's bullshit yet? I really wish she would just jump off the nearest high rise building and save us all time and energy. At least with Seth Tate, we actually had a tangible villain that didn't hide who or what he was. It was a chess match watching Tate and Merit, whereas now, it's a bit on the silly side that someone in her position could have the means to consider anyone she considers dangerous to be a domestic terrorist. Isn't what the FBI, or Homeland's responsibilities are? Isn't that what the fourth and eighth amendment protect us from?

I'm curious to see where Neill takes this series now that Ethan has made his choice about future moves, and now knows about Gabriel's prophecy concerning Merit. I like that Merit and Mallory are moving forward, and not letting past mistakes ruin their friendship. I loved the appearance of Tall Dark, and handsome Damien Garcia to the story, as well as Tanya Keene's sister Emma who kicked some serious ass.

Blood Games (Chicagoland Vampires #10) will be released on August 5, 2014, and thus begins the wait until I am either able to find the money to buy the book, or my local library finds the necessary funds to purchase it for me.