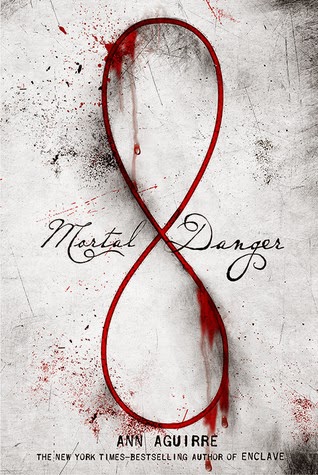 **I received this book directly from the publisher in exchange for an honest review. This does not affect my opinion of the book or the content of my review.**

Revenge is a dish best served cold.In Ann Aguirre's Mortal Danger, Edie Kramer has a score to settle with the beautiful people at Blackbriar Academy. Their cruelty drove her to the brink of despair, and four months ago, she couldn’t imagine being strong enough to face her senior year. But thanks to a Faustian compact with the enigmatic Kian, she has the power to make the bullies pay. She’s not supposed to think about Kian once the deal is done, but devastating pain burns behind his unearthly beauty, and he’s impossible to forget. In one short summer, her entire life changes and she sweeps through Blackbriar, prepped to take the beautiful people down from the inside. A whisper here, a look there, and suddenly . . . bad things are happening. It’s a head rush, seeing her tormentors get what they deserve, but things that seem too good to be true usually are, and soon, the pranks and payback turns from delicious to deadly. Edie is alone in a world teeming with secrets and fiends lurking in the shadows. In this murky morass of devil’s bargains, she isn’t sure who—or what—she can trust. Not even her own mind.

Ann Aguirre has created a world where separate entities play the ultimate game of chance. Where there are mythological monsters, and creatures that are created from the imaginations of humans. Where one who is considered to a catalyst (one destined for greatness), is considered to be the Queen of the game and therefore a valuable tool to both sides.

Mortal Danger focuses on Edith (Edie) Kramer. When we first meet Edie, she's reached the end of her rope, and decides to kill herself. She has it all meticulously planned out to the very minute. Edie has been the brunt of cruel bullying and harassment by the so called Teflon crew at Briarwood Academy that goes beyond what is considered to be in good taste. She's shy, she has absolutely no friends, her parents are pretty clueless and ignorant about her unhappiness, and in her mind's eye, it's better to be dead, than face yet another day.

Kian Riley appears out of nowhere and offers Edie a way to get her revenge on those who did her wrong.

"I’m authorized to offer you three favors now in return for three favors later.”
“I don’t understand. What kind of...favors?”
“Anything you want,” he said.

With her first wish, Edie asks to be beautiful while retaining her smarts. With a full body magical transformation, a few weeks at a science camp where she finds an actual friend, and a boyfriend, Edie believes that she is ready to take on her demons. If you think all is well is happyville, you would be absolutely wrong. What she doesn't plan on is her feelings for Kian, or what is truly expected of her once her revenge has taken place, or who would be pulling all the strings in order for this to actually happen, or the fact that innocents would be tossed into harms way without a care in the world.

**Here's where I tell you what I didn't like about this story. I think the story's message is absolutely wrong. It's saying that beauty and popularity is more important than being who you really are. That a person with boat loads of insecurities can suddenly find themselves the queen of the damned, with loads of self confidence to boot. While I don't agree with bullying AT ALL, a large majority of us have been through it, and gone on to be better lives than those who bullied us. Most of us weren't beauty queens in High School but we managed to survive and blossom after we went to college, and started our careers.

I'll also call out those who don't believe that people who are bullied kill themselves. Obviously, you are not paying attention to the news. I would also say that if you are bullied and think that you need to commit suicide, to please talk to someone first.

**The insta-romance between Edie and Kian kind of unnerved me to be perfectly honest. I have a whole lot of faults with Kian starting from the fact that he "watched" as Edie got bullied, and faced the worst moments of her life without stepping in and helping. The fact that he apparently liked Edie when she was "ugly" and now that she's beautiful, he's hopelessly in love with her, and willing to die in order to protect her.

I have to speak about Edie's parents for a moment. You've heard about helicopter parents. You've heard about latch key parents. Edie's parents are oblivious to what is actually happening to their daughter. They go on trips for months at a time. They are so focused on their work, that they missed all the signs that something was horribly wrong with Edie. When they do finally appear as parents, Edie has already made her choice, changed her appearance, and started on a journey that only Aguirre knows where it ends.

It took a very long time to come up with the right words for this review without sounding negative, or petulant, and I'll probably end up coming back to this later on. I am not one to angrily shake my fist at the author and scream and holler. I am not sure how I managed to make it to the very end, but apparently I am eager to be emotionally torn apart at the seams by Aguirre. As with her Enclave series, there is not one character that you can seriously consider to safe in this story.

I still haven't got a handle on the agencies involved in this story. While Aguirre manages to give us just enough information to keep us busy, she stops at revealing the other side of the coin, and those who are called the opposition. Mortal Danger has been an interesting book to talk about. Some have absolutely hated it, while others, like me, are somewhere in the middle.