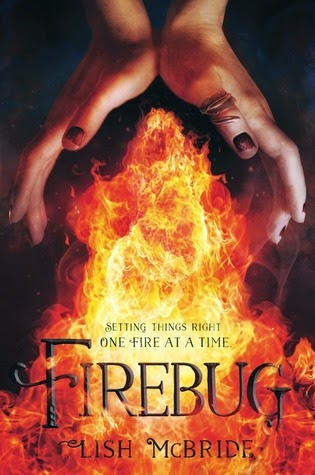 **I received this book for free from Henry Holt and Co. (BYR)/Macmillan in exchange for an honest review. This does not affect my opinion of the book or the content of my review.**

Ava is a firebug—she can start fires with her mind. Which would all be well and good if she weren’t caught in a deadly contract with the Coterie, a magical mafia. She’s one of their main hitmen . . . and she doesn’t like it one bit. Not least because her boss, Venus, killed Ava’s mother. When Venus asks Ava to kill a family friend, Ava rebels. She knows very well that you can’t say no to the Coterie and expect to get away with it, though, so she and her friends hit the road, trying desperately to think of a way out of the mess they find themselves in. Preferably keeping the murder to a minimum, in Lish McBride's Firebug.

Firebug is the first in a two book series by Lish McBride. The story, like McBride's Hold Me Closer, Necromancer, is filled fun, sardonic characters that are deeply embroiled in a world controlled by a supernatural mafia that owns them lock, stock, and barrel. Firebug is a story that is packed with action, a bit of romance, a bit of silliness at times, and dialogue that will leave you grinning like a fool.

The story is told through the eyes of Ava Halloway who has the ability to create fire with her mind thus the label Firebug. Ever since her mother was killed, Ava has been a blood bound assassin for a group known as the Coterie. As one of the Elite, Ava and her teammates, Ezra (were-fox) and Lock (part-dryad) are scary good. But, when the Coterie orders Ava to kill a friend, she refuses and sets in motion events that will have an everlasting impact on the Coterie, and Ava'a ability to remain free.

I absolutely loved the interactions between Ava, Ezra, Caden and Lock. Yes, there is a bunch of wise cracking jokes. Yes, there is the interrupted romance that should have been removed like a boil with a lance. But, the characters genuinely care for each other, and would stand up and fight until the bitter end if that's what it takes to survive. It doesn't take a brainiac to understand that these kind of stories are what I enjoy the most.

Ava is a pretty mouthy character, but I wouldn't want to change her to fit into anyone's idea of what a heroine should act like. You have to follow her entire story, including the flashbacks to when she and her mother were on the run. A reader must take in all evidence as to why the character puts out a front like Ava does and does't come across as cold hearted bitch in the process.

Ava tries to be brave in the face of a boss that could snap her neck with her fingers, and has a sidekick that is just as deadly. But, when you realize how awful Ava's situation really is, and how she was basically blackmailed into accepting her binding, you come to understand her bluntness. There are times that I would have liked to tweak Ava'a nose for not seeing what was right in front of her, but patiently held my breath hoping that a light would come on. Sometimes, I think authors make characters intentionally puzzling to see what kind of rise they can get from their readers.

I will be eager to see where McBride takes this series in the next installment. I definitely want more of Lock, and Ezra, and Caden, especially Caden now that a puzzle piece has been revealed. I want to see how McBride manages to wiggle Ava out from underneath her masters, while also giving her a happy ending.