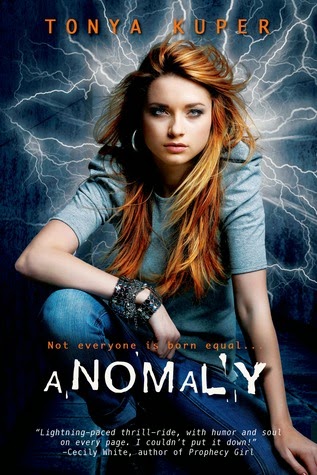 *I received this book for free from Entangled Teen via NetGalley in exchange for an honest review. Thank you!! This does not affect my opinion of the book or the content of my review.*

My first boyfriend dumped me—happy birthday, Josie!—my dad is who knows where, I have some weird virus that makes me want to hurl, and now my ex is licking another girl’s tonsils. Oh, and I’m officially the same age as my brother was when he died. Yeah, today is about as fun-filled as the swamps of Dagobah. But then weird things start happening…Like I make something materialize just by thinking about it.When hottily-hot badass Reid Wentworth shows up on a motorcycle, everything changes. Like, everything. Who I am. My family. What really happened to my brother. Existence. I am Oculi, and I have the ability to change reality with my thoughts. Now Reid, in all his hotness, is charged with guiding and protecting me as I begin learning how to bend reality. And he’s the only thing standing between me and the secret organization that wants me dead…

Anomaly is the first novel in the Schrodinger's Consortium series and author Tonya Kuper's first full length novel. Anomaly is told in alternating first POV's by 17-year old Josie Harper, and Reid Wentworth her trainer, protector, and powerful Anomaly. Kuper's idea to use Dual POV actually works. You don't have to imagine what the other person is thinking. Kuper puts you in both of their heads and you get first hand accounts as events progress and the action ramps up.

Anomaly starts out with Josie having the worst day ever. Celebrating her Seventeen birthday, she's dumped by her her first real boyfriend in front of her friends. Her father has been missing for months, and her mother has checked out on her responsibilities to her kids. Then, out of nowhere, Reid shows up to enlighten Josie about the trouble that she will soon face, and train her to be the powerful Anomaly Oculi she has the ability to become.

Anomaly is filled Oculi who can create reality through observation. The Oculi are separated into Pushers who have the ability to create matter with a thought. Retractors who erase matter with a thought, and Anomalies, like Josie and Reid, who can do both. Anomaly is also a story about the Schrodinger's Consortium who have set their sights on controlling Oculi like Josie, and the Resistance who is doing everything in their powers to protect Josie and the innocents the Consortium harms.

I do think that the relationship between Josie and her mother was probably the saddest part of the story. Her mother could have done a whole lot better in explaining things about the Resistance, Consortium, and Oculi before Josie found herself being thrown into the fire with only her wits to save her. The only good thing that her mother did for her, was train Josie and her brother Eli in Taekwondo while they were continually moving from place to place. I supposed one could say that she was trying her best to protect her from a world that had already torn the family apart.

I will say that Anomaly had me laughing at times and a bit angry in others. It was that laughing that allowed me to enjoy this book a bit more than I would have otherwise. I love that Josie is a science geek who is deeply involved in comic books and science fiction culture. Perhaps I haven't grown out of my geek phase in life, and perhaps I have no intention of doing so. Josie is also genius in the area of physicists which gives her more depth as a character.

I will say that I am definitely on board with reading the sequel to Anomaly. I do have questions about Josie's father, and what really happened to him. I would also like to know more about Reid who's real identity I won't spoil. I want to see how Josie and Reid's relationship works out especially since they do have a connection that isn't love at first sight. I want to get an inside look into the Hub, and meet other Oculi who aren't out to kill, or capture Josie. Lastly, I really do hope that Josie and her mother can have a reconciliation when all is said and done.