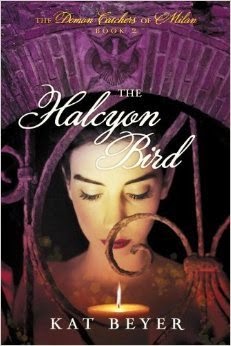 **I received this book for free from Egmont USA via Edelweiss in exchange for an honest review. Thank you!! This does not affect my opinion of the book or the content of my review.

Mia has settled into her life with the Della Torres -- Milan's premier demon-catching family, accompanying them to exorcisms and even learning some way to be useful in the family trade. Then Bernardo comes into her life, handsome, well-mannered, someone who makes her forget her impossible crush on Emilio, her cousin. But always lurking in the background is the demon who possessed Mia once before, and who has not given up on possessing her again--this time for good.

Milan, Italy is once again the setting for Beyer's The Halcyon Bird, the second installment in the The Demon Catchers of Milan series. The story picks up right where it's predecessor left off. 16-year old Mia Dellatorri, the protagonist, was saved from a demon possession by her cousins Emilio and Giuliano, and brought to Italy where she trains as a demon catcher.

Mia is given more free reign this time out by her family. The freedom allows her to explore her own Italian heritage, her families place in Italian history, and while training hard to be able to protect herself from the demon who refuses to leave her alone. Mia has come a long way in quickly picking up the Italian language, which isn't as easy as it sounds. Italian does have regional dialects that throw you for a loop! Trust me folks, when you travel from Milan to Napoli, you will notice a difference.

Mia's journey is far from over as we soon learn. There are still way too many questions, and no true answers to why Mia was possessed in the first place, or why the demon refuses to leave her alone. I am hoping that if and when a third installment in this series is released, that Beyer will pick up the broken threads and sew them together.

The Halcyon Bird isn't necessarily an action packed story and does drag at times. But, it does move the series forward to the point where Mia is now becoming more a part of the Della Torre family, which means going on dangerous exorcisms, and adding her two cents to how they should proceed. I think Mia has come to terms with her new fate, while trying to have a life regardless of the dangers of finding someone to fall in love with. I wouldn't take Mia for granted at this point of the story. When all is said and done, I can't see any reason that Mia would leave this family behind to return to the US.

I really do adore the Della Torre family at the center of this series. Giuliano, Laura, Anna Maria, Francesca, and Emilio all bring different things to the table, and each plays a large role in what happens with Mia, her training, and finding a way to defeat Mia''s demon. I think it's fascinating that Beyer has found a way to intermingle couple's struggles and challenges into her story, while explaining how the demon catchers keep what they do a secret from even their closest friends.

I love that Beyer doesn't restrict Mia's activities to the Della Torre's family candle shop any longer. I like that she explores historical aspects of the city, and takes in the large variety of food which Italy is famous for. As an Italian who has visited Italy while serving in the Navy, and with Italian descendants who legally immigrated to this country in the early 20th century, I can tell you that Beyer does a great job in creating what typical Italian families eat, and how they treat each other.