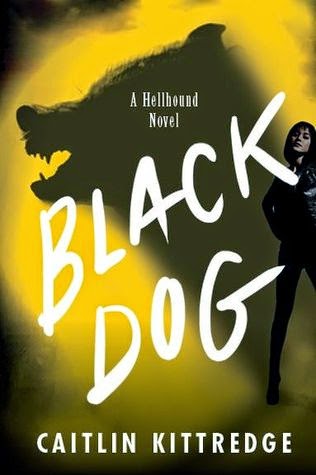 **I received this book for free from Harper Voyager via Edelweiss in exchange for an honest review. Thank you!! This does not affect my opinion of the book or the content of my review.

The first installment in a fabulous dark urban fantasy series—think Kill Bill with demons and gangsters instead of martial arts—from the award-winning author of the Iron Codex trilogy and Vertigo comic Coffin HillAva has spent the last hundred years as a hellhound, the indentured servant of a reaper who hunts errant souls and sends them to Hell. When a human necromancer convinces her to steal her reaper’s scythe, Ava incurs the wrath of the demon Lilith, her reaper’s boss.As punishment for her transgression, Lilith orders Ava to track down the last soul in her reaper’s ledger . . . or die trying. But after a hundred years of servitude, it’s time for payback. And Hell hath no fury like an avenging Ava

Caitlin Kittredge returns with a new series called Hellhound Chronicles. Kittredge, author of such series as Nocturne City, and Black London, once again creates her own unique world where reapers, hellhounds, demons, necromancers, good and bad angels exist. As a fan of dark urban fantasy novels, Black Dog fits nicely into my expectations.

Black Dog is told in the first person narrative by Ava. Ava has been a hellhound for nearly 100 years after she was given a second chance to live. Her job is to collect/fetch souls for her reaper and return them to hell. She's really good at her job in spite of her arrogant Hellspawn master Gary who lacks any morals. Hounds like Ava are basically slaves who have little if any free will of their own.

A not so chance meeting with Russian necromancer Leonid "Leo" Karpov in Las Vegas, changes everything Ava's ever known. When Ava slays her reaper, she ends up on a collision course with the original demon, Lilith. Sent by Lilith to retrieve Gary's last mark Clint Hicks, Ava gets more than she bargained for. Especially when she learns Clint's real identity and what part in Lilith's equation she plays. Ava, along with Leo, and Clint, journey across the country, ending with Ava and Leo attempt at determining their own destiny.

Let's get right to the nitty gritty. Black Dog is an interesting and refreshing take on Hellhounds, Grim Reapers, the Fallen, and Demonspawn. It is a rarity when you have a Hellhound as a lead character, and the story is as original as one can expect from someone who dug deep into darkness with her Black London series. If you've read Kittredge's previous novels, you know that you really can't expect the usual. You can expect curveballs, mysteries, surprises, and lots of bloody action.

As a lead character, Ava has some issues, but you could say that these issues were what made her a likable character. While she is a badass most of the time, especially with her ability to quickly transform into a Hellhound and hunt down her prey, she also has a lighter side that could be construed as being a bit on the annoying side. Kittredge's decision to give certain flashbacks to Ava's past, actually helped the story and not hindered it.

Ava's partnership with Leo was one of the things I had some issues with. I guess I am become numb to sex scenes that are placed in the middle of something important happening. Yes, let's have sex, while the big bad is chasing us, hoping to rip our throats out at the next second. I honestly didn't care much for Leo, but I guess where Ava goes, Leo goes. Leo was more arrogant than supportive. More annoying than helpful.

There are some loose end that Kittredge doesn't tie up and I wonder what that means for the rest of this series. Ava and Leo have a new adventure, Grim Tidings, releasing August of 2015. I am sure I will be reading the next installment. I am hopeful that the series remains action packed, and not relying on sex to carry the story.