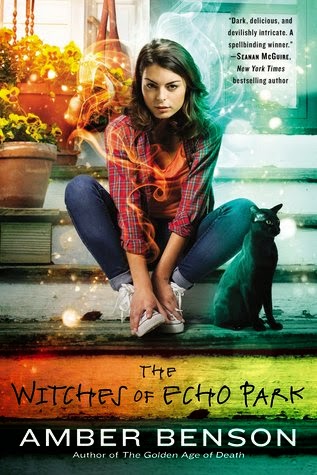 **I received this book for free from Ace Trade via Edelweiss in exchange for an honest review. Thank you!! This does not affect my opinion of the book or the content of my review.**

Unbeknownst to most of humankind, a powerful network of witches thrives within the shadows of society, using their magic to keep the world in balance. But they are being eliminated—and we will all pay if their power falls…When Elyse MacAllister’s great-aunt Eleanora, the woman who raised her, becomes deathly ill, Lyse puts her comfortable life in Georgia on hold to rush back to Los Angeles. And once she returns to Echo Park, Lyse discovers her great-aunt has been keeping secrets—extraordinary secrets—from her.Not only is Lyse heir to Eleanora’s Victorian estate; she is also expected to take her great-aunt’s place in the Echo Park coven of witches. But to accept her destiny means to place herself in deadly peril—for the world of magic is under siege, and the battle the witches now fight may be their last…

Amber Benson, author of the Calliope Reaper-Jones series, returns with The Witches of Echo Park. Set in California, Witches is an urban fantasy novel with a romantic element. Witches begins with a dire warning that something calamitous is likely to happen soon, and the coven will need to stand strong against the coming evil.

Benson intertwines Witches between (6) main characters who have a variety of magical skills from clairvoyance, tarot card reader, herbalist, empathy and Dream weaver. I would definitely say that Eleanora and Lyse are the most prominent in this, part 1. But, I would not discount or ignore the rest of the coven for fear of missing out on something important.

Eleanora Eames, the leader of the Echo Park coven, is dying from cancer. She fully expects that her niece will take her place once she is gone. Eleanora has a few dark secrets/skeletons all her own and she hasn't spoken to anyone about them, not even her niece which puts her at a clear disadvantage to others and the coming danger they will face. Benson gives readers a much more intensive background look into Eleanora's past, mindset, and actions than other character. I do think this was necessary for reasons that I won't spoil. I do, however, lay full blame for Lyse being blind in a dark, cold alley.

Elyse (Lyse) Eames-McAllister is Eleanor's niece who spent her early teen years living with her "great-aunt" after her parents died, then moved to Athens, Georgia. She never knew her "great-aunt" was a witch, nor did she have any idea that one day she would be forced into taking the mantle of the Echo Park Coven. Lyse has one of the most sexually explicit encounters of anyone in this book. Lyse is also facing the most difficult challenges of any character. She has to come to grips with the reality that things aren't as straight forward as they seem, and she might be a target for the coming storm. I do think that Lyse has a long way to go before we can call her a heroine, but I don't doubt that Benson will get us there.

Devandra, Arrabelle, Daniela, and Lizbeth round out the coven. Each of these characters has a part to play in the coven and the story. Each has their own unique views and situations that are explored. With Dev, her daughters adds a curious element to the story and one that should be explored further.

The most interesting characters outside of Eleanora and Lyse are Daniela and Lizbeth. Daniela has some interesting side storylines if Benson decides to explore them further. I do believe that Lizbeth and Lyse's relationship needs to be given more of a chance to grow since they've been tossed together without understanding anything about the other person. Lizbeth is perhaps the most intriguing of all the witches and I'm looking forward to seeing where Benson takes her character.

One of the biggest mysteries of Witches is The Flood. "The Flood is coming and we need to clear a path." You could say that Witches ends on a cliffhanger because we really don't have any idea who is leading the Flood, or why they've decided to eliminate witches covens around the world. I will say that the last third of Witches was the strongest, and most entertaining. It also left me with questions about Lyse & the Flood.

I will say it. I was duped by the cover. I truly thought Witches was more of a young adult novel than it really was because the girl on the cover looks to be about 17. Witches is definitely aimed at an Adult audience with one of the steamiest sex scenes you will read about. I have no reservation to say that I will be continuing this series. Benson's writing is always straight forward, and doesn't leave a whole lot of room to complain that something is missing.